Skip to main content
Monosodium glutamate (MSG) products of the Ajinomoto food company are displayed at a supermarket in Tokyo on January 20, 2020. ( AFP / Behrouz Mehri)

The post included a photo of Ajinomoto's umami food-seasoning product.

Umami seasoning, which contains monosodium glutamate (MSG), was discovered in the late Japanese chemist Kikunae Ikeda. He registered the patent in 1908. 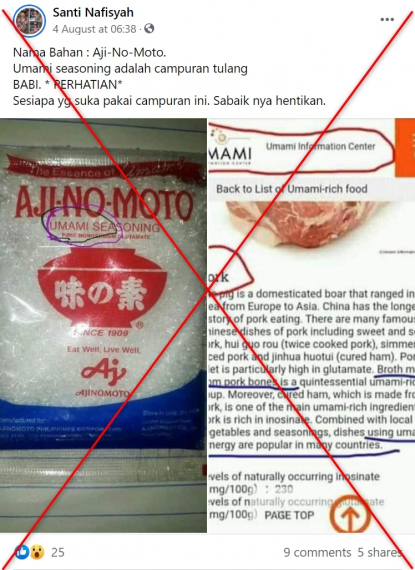 "Umami seasoning is a mixture of PORK bones. * ATTENTION* Anyone who often uses this mixture. It's better to stop."

The dietary standard in Islam prohibits Muslims from consuming certain foods, including pork.

The claim was also shared here and here.

Ajinomoto explains on its website that it produces MSG from plant-based ingredients.

It reads: "Today, the MSG (monosodium glutamate) produced by the Ajinomoto Group is produced through fermentation of plant-based ingredients such as sugar cane, sugar beets, cassava or corn."

It shows how it makes its MSG products on Facebook here.

Ajinomoto is approved as halal in Malaysia, according to a search on the database of the Malaysian government's Islamic development department.

The claim was debunked by the food safety division within Malaysia's ministry of health on its Facebook page here.

The post, published on August 6, 2021, reads: "But don't worry, the biggest MSG producer in Malaysia also has JAKIM's Halal certificate. The source of raw ingredients are cassava and sugar cane."

In a press release dated June 20, 2021, PT Ajinomoto Indonesia says its products had been reissued with a halal certificate from the Indonesian Ulema Council (MUI).

A keyword search found a screenshot shared in the first misleading post was taken from this web page on the Umami Information Center's website, a Tokyo-based non-profit organization .

It lists pork as just one source of umami-rich ingredients.

A screenshot shared by another misleading post was taken from this "Umami Basics" page of the Umami Information Center, under the title "Umami synergy".

The first two paragraphs read: "The main umami substances are glutamate, inosinate and guanylate, and it has been scientifically proven that umami is sensed far more strongly when these are present not individually, but when glutamate is combined with inosinate or guanylate. This is referred to as umami synergy.

"Yet people have been capitalizing on umami synergy for centuries, long before this effect was scientifically proven. All over the world, in dishes from soups combining glutamate-rich vegetables and inosinate-rich meat and fish, to the tang of Chinese cuisine extracted from chicken or pork bones and green onions, to Japanese dashi made from kombu (high in glutamate) and katsuobushi (high in inosinate), people have acquired an empirical understanding of umami synergy and applied that knowledge to cooking."