Social media posts claim Covid-19 vaccines lead to virus mutations and say vaccinated people are responsible for variants, citing the case of a different disease that affects chickens as evidence. But experts say the analogy is flawed, and that vaccines reduce rather than enhance the risks posed by Covid-19.

"It is the vaccinated NOT the unvaccinated spreading the mutant variants... This is what has happened with numerous other 'leaky' (non-neutralizing) vaccines. The classic example of this is Marek's disease in chickens," says text attributed to "Janci Lindsay, Ph.D." in an August 7, 2021 Facebook post.

"So please spare me the propaganda that the unvaccinated are the ones 'causing' this because they are not and there is a clearly defined mechanistic pathway for how the vaccinated are creating the mutants," says the text in an image featured in the post. 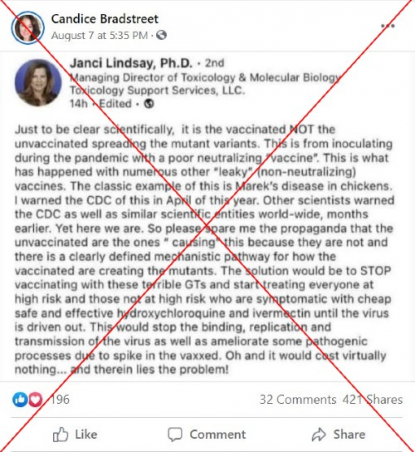 "These people that are saying, 'Oh it's these unvaccinated people that are responsible for the variants.' Well, there's actually scientific papers that point to the very sort of environment that we're creating by having so many people vaccinated with a vaccine that doesn't kill off the virus, it actually can lead to more potent viruses," Rogan said.

An August 8 tweet links to an article headlined "Vaccines Are Pushing Pathogens to Evolve" and says: "This was published before COVID-19 had hit, yet it hits the mark on how the COVID vaccination campaign could be driving the emergence of resistant variants of SARS-CoV-2."

But the author of the article, Melinda Wenner Moyer, rejected the claim on Twitter.

"Hi! I wrote this piece, and you are completely missing the point and misinterpreting the science," she wrote.

The article is based on a study about Marek's disease in chickens -- the case mentioned in the social media posts attributed to Lindsay.

Published in PLOS Biology in July 2015, the study led by Pennsylvania State University biology professor Andrew Read found that "anti-disease vaccines that do not prevent transmission can create conditions that promote the emergence of pathogen strains that cause more severe disease in unvaccinated hosts."

It analyzed Marek's disease in poultry, which has plagued the agricultural industry for decades. The study found that for this disease and vaccine, immunization which stops serious illness but fails to stop the spread of disease can enhance "the fitness of more virulent strains" in the flock.

The study said this is often called a "leaky" vaccine. However, the posts attributed to Lindsay extrapolate the logic to apply to the today's Covid-19 vaccines and variants.

Read told AFP that this comparison is "irresponsible."

The study deals with chickens, not humans, and a herpes virus, not a coronavirus.

"Delta is spreading like wildfire in the non-vaccinated. Even if no one was vaccinated, Delta would be spreading rapidly. Choosing not to vaccinate puts people at risk of severe disease, irrespective of the variants," he said, referring to the highly infectious coronavirus variant behind a surge in cases.

"It is irresponsible for people to use hypothetical concerns... as a reason to withhold life-saving vaccines now," Read added.

"The Delta variant did not arise because of vaccines. The Delta variant arose out of natural competition with the Alpha variant," first identified in the United Kingdom. She noted that Delta arose in India in the absence of widespread vaccination against Covid-19.

"The best way to prevent the variants is to vaccinate as many people as possible."

Like Read, microbiologist Donald Alcendor emphasized that the virus that causes Marek's disease and SARS-CoV-2 are distinct and behave differently.

Alcendor, who teaches pathology, microbiology and immunology at Vanderbilt University School of Medicine, called the comparison between Marek's disease and coronavirus "a poor analogy."

AFP has debunked other inaccurate claims about vaccines here.