Skip to main content
A pro-democracy protester wearing a face covering denouncing Thailand’s lese majeste laws carries a fake body in a white sheet as other fake bodies burn behind him in Bangkok on July 18, 2021 ( AFP / Lillian SUWANRUMPHA)

An image appearing to a show a pile of "body bags" has been shared among multiple Facebook users in Sri Lanka with a claim it shows coronavirus fatalities. The claim is false; the image actually shows a pile of mock corpses staged by pro-democracy protesters in Thailand during a demonstration held in July 2021.

The picture was shared in this post published on August 9, 2021. It has been shared more than 500 times.

"Did you think these were packaged chicken?
No these are corona fatalities" 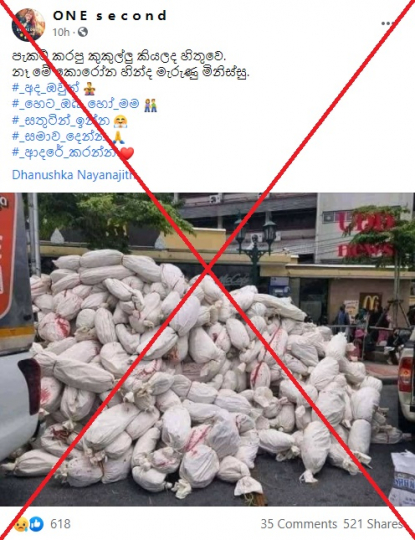 An identical image has been shared on Facebook here, here and here alongside a similar claim.

The posts began circulating after reports of local hospitals and healthcare workers being stretched thin following the 'explosion' of the Delta variant in Sri Lanka.

The claim, however, is false; the image actually shows a pile of fake bodies used by pro-democracy protesters in Thailand to signify the government's mismanagement of the pandemic at a demonstration held in July 2021.

A Google reverse image search of the picture led to this original photo published by UDD News in a Facebook post on July 18, 2021.

UDD refers to Thailand's pro-democracy pressure group United Front for Democracy Against Dictatorship that has been active in Thai politics since 2009. Their supporters are known as 'Red Shirts'.

The post's Thai-language caption translates as:

"#July18Mob/ 11.45 a.m. This is the atmosphere at the Democracy Monument, McDonald’s side, before the protest appointment time. There is a truck that carries fake bodies as shown in the picture. Red-shirt protesters gradually arrived at the area, including Alek Chokromphruek who is performing. Bags containing raincoats, N95 masks, face shield, and alcohol gel were also given for free, along with gloves.”

An identical image was published on UDD Facebook page

Below is a screenshot comparison of the misleading post image (L) and the photo from the UDD page (R). 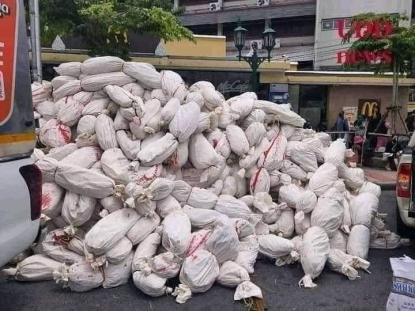 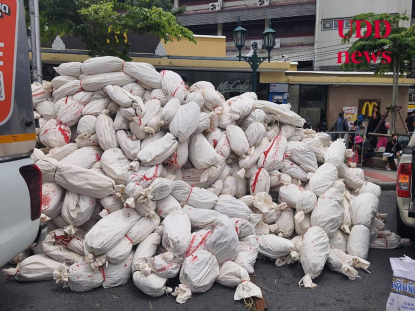 On July 18 2021, anti-government protesters gathered in Bangkok to mark the one year anniversary of the pro-democracy movement calling for the resignation of Thai Prime Minister Prayut Chan-O-Cha, AFP reported.

The AFP report mentions the body bags, and they were also described by Thai media outlet Prachatai here.

The article reads in part: "White bags stuffed with straw and painted red to depict blood, the body bags were originally meant to graphically represent the kingdom’s total death toll from Covid-19, a tragedy exacerbated by state mismanagement."

"Although some were seized by police, a number reach the protest site and were used as shields against razor wire, rubber bullets and water blasts."

"At the end of the protest, body bags were burned and put on the guillotine, another statement of sorts."

The posts and media reports on the protest said the demonstration on July 18, 2021 was held at Democracy Square in Bangkok and that the bodies were piled up in front of the McDonald's at the site.

Here is a comparison between the landmarks in the posts' image (L) and the Google Street View image of the site in Bangkok (R). Similarities have been highlighted in yellow by AFP. 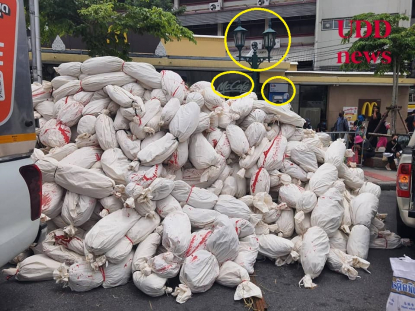 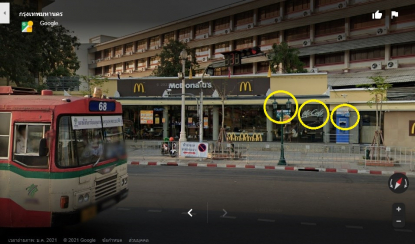 Screenshot of from Google maps taken on August 9, 2021