A photo has been shared thousands of times in Facebook posts which claim it shows a pagoda in the ancient Burmese city of Bagan that was purportedly destroyed in a bomb attack on August 7, 2021. However, the claim is false; there were no reports of a bomb in Bagan at this time and the photo has been circulating online since at least 2019.

"What happened in Bagan this afternoon. I am so sad. It was a bomb attack on a pagoda in Bagan," reads a Burmese-language Facebook post from August 7.

"Bagan is a place with so many pagodas. You are not a Burmese if you don’t 'up' this".

The post -- shared more than 9,000 times -- shows a photo of smoke rising from a burning building. 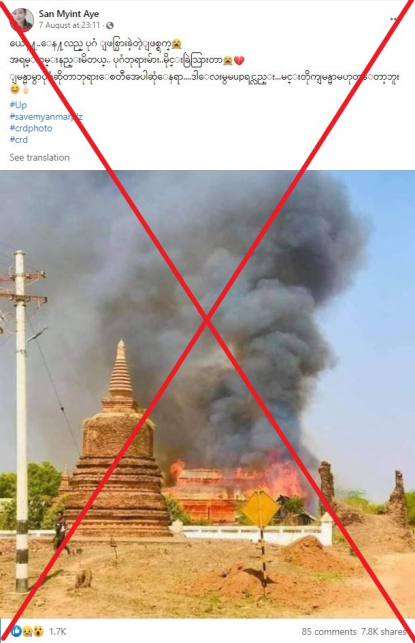 Bagan is an ancient city and a UNESCO World Heritage site in central Myanmar, renowned for Buddhist architecture and art, such as temples, monasteries and sculptures.

The same image has been shared in Facebook posts here, here, here and here alongside a similar claim.

Keywords search on Google found no reports of a bomb attack in Bagan on or around August 7, 2021.

A Google reserve image search traced the photo of the burning building to Facebook posts from February 2019 about a fire at a monastery in New Bagan, a residential area close to the heart of the archeological zone.

The Burmese-language post reads: "A fire broke out around 12:45 in the afternoon on February 17, 2019 at a monastery in Min Nan Thu village in New Bagan city. Two fire trucks were dispatched to fight the blaze". 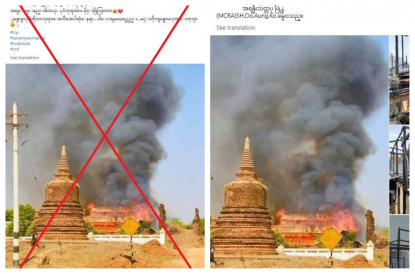 The Myanmar Times also reported on the blaze in an article from February 17 headlined, "Fire broke out at Laymyatnar Monastery near Minnanthu village in Bagan".

According to the article, the fire started from an electrical fault and burnt down two stories of the monastery, although no injuries were reported.

This Google Maps image of Lemyethna Pagoda, known as Laymyatnar Monastery in Myanmar and reported to be next to the blaze, shows the pagoda seen in the Facebook post. 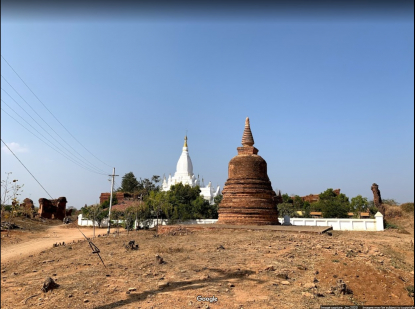 A screenshot of Lemyethna Pagoda on Google Maps.