Footage of Nigerian politicians exchanging pleasantries with Abba Kyari, the deputy police commissioner implicated in a US fraud case, is circulating on social media with a claim that it shows these politicians meeting in support of the embattled policeman. However, the claim is false: the video is old and unrelated to Kyari’s current predicament.

The video shows Kyari with the governor of Nigeria’s northern Borno state, Professor Babagana Zulum, and his predecessor, Senator Shettima.

More than 10,000 people have seen the clip shared on Facebook by Lere Olayinka, a staunch critic of Nigeria’s ruling party, All Progressives Congress (APC), and former media aide to ex-governor Ayodele Fayose in southern Ekiti state. 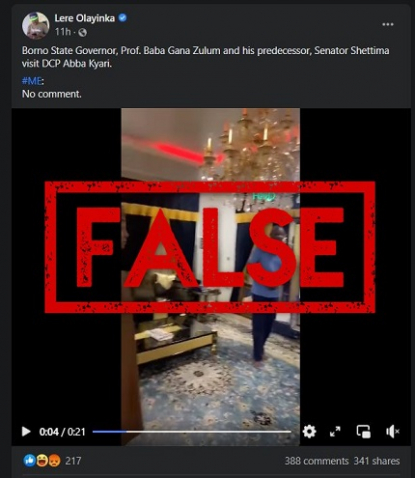 “Borno State Governor, Prof. Baba Gana Zulum and his predecessor, Senator Shettima visit DCP Abba Kyari (sic),” reads the caption of the post, which has been shared nearly 400 times since it was published on August 4, 2021.

However, the “super cop”, as he’s widely called, was recently accused by US authorities of helping Nigerian social media influencer Ramon Abbas, known as Hushpuppi, allegedly steal more than a million US dollars.

Abbas is standing trial in the United States, where he pleaded guilty to money laundering and other crimes, prompting Nigerian police to suspend Kyari and launch an investigation into his alleged involvement.

However, there is no evidence to show the politicians visited Kyari after he was implicated in the fraud case.

Using the InVID WeVerify tool, AFP Fact Check ran a reverse image search on keyframes of the video and found that it had already been shared on Kyari’s Facebook page – on June 30, 2021, nearly a month before he was first accused in the fraud case. 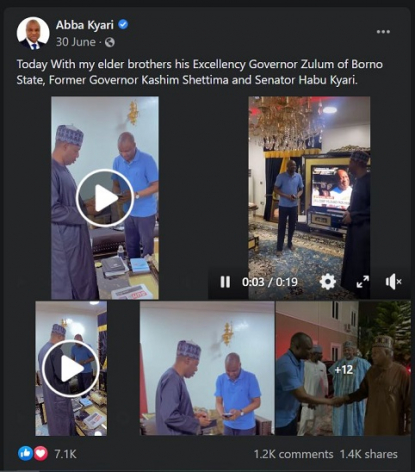 Meanwhile, the spokesperson for Governor Zulum, Malam Isa Gusau, said neither Zulum nor Shettima had visited Kyari at his residence.

Instead, he said in a Facebook post that the video was filmed at Shettima’s residence in Nigeria’s capital Abuja in June 2021, “when Abba Kyari paid an empathy visit to Shettima following mischievous circulation of rumours that the Senator had died in the UK (sic).”

“Kyari who hails from Borno State and in Shettima’s constituency visited the former Governor to wish him well like many others had visited the Senator during the time,” the Facebook post further reads. The same statement was also published by the governor on his Facebook page.

AFP Fact Check previously debunked similar posts claiming that Kyari travelled to the United States, trying to prove his innocence against the charges.