An image showing a Nigerian cop implicated in a US fraud case standing next to a man in a suit has been circulating on social media in Nigeria. The posts claim that Deputy Police Commissioner Abba Kyari is in the United States, trying prove his innocence against the charges. But the claim is false: there is no evidence that Kyari has travelled to the United States to defend himself, and the accompanying photo is old and unrelated to the trial.

Most of the posts with this photo were captioned in Hausa, according to social media monitoring tool CrowdTangle. Hausa is the predominant language spoken in Nigeria’s north, including in Borno state, where embattled Deputy Police Commissioner Abba Kyari is from.

One version of the claim has been shared over 500 times since publication on August 2, 2021. 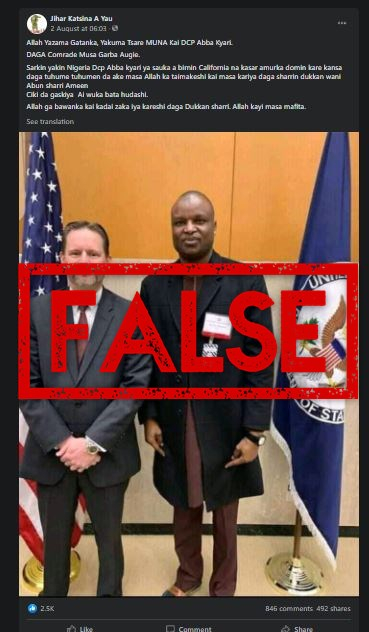 “Political leader of Nigeria, DCp Abba kyari has landed in California, USA to protect himself from all the accusations thrown at him,” reads the English translation of the Facebook post. “God help him, protect him from all evil. A righteous person can't be stabbed.”

Kyari heads the Police Intelligence Response Team and is celebrated for exposing several high-profile crimes in Nigeria, including tracking suspected kidnappers and terrorists.

However, the “super cop”, as he’s widely called, was implicated for allegedly aiding Nigerian social media influencer Ramon Abbas, known as Hushpuppi, in stealing more than a million US dollars.

Abbas is standing trial in the United States, where he pleaded guilty to money laundering and other crimes, prompting Nigerian police to suspend Kyari and launch an investigation into his alleged involvement.

Although Kyari initially denied the allegations against him in a Facebook post, he later deleted the post after multiple alterations, adding to concerns about his possible extradition to the US for prosecution. 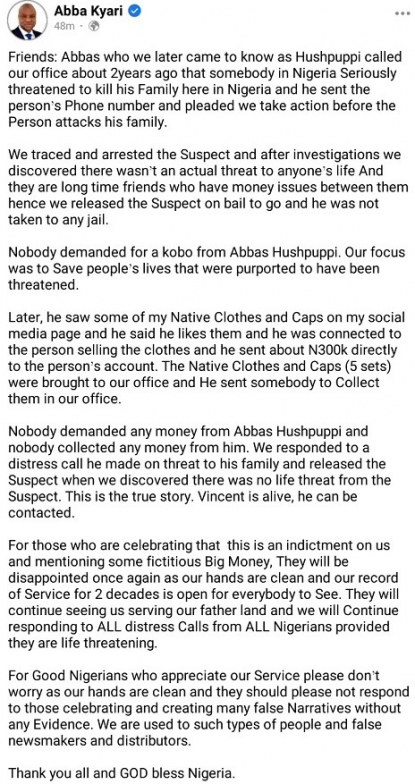 In reality, there is no evidence that Kyari has travelled voluntarily to the United States trying to prove his innocence, and the photo in question was taken outside of California, long before the recent spotlight fell on him.

AFP Fact Check sifted through Kyari’s social media pages and found that the cop originally published the photo and several others when he visited Washington DC, in the United States.

“A Visit to the Office of the Secretery of States In Washington DC as part of our Program (sic),” reads Kyari’s Facebook post from April 20, 2019, which was shared with the viral photo and five others. The training program focused on “National Security/Transnational Crime and Leadership,” according to one of the cop’s previous posts.

He also published the photo with the same caption on Instagram.

AFP Fact Check has asked Nigeria’s police and the US Attorney General's office for comments on Kyari’s whereabouts and will update this report once these are received.

Kyari’s indictment by the U.S. Attorney’s Office in the Central District of California comes at a time when Nigeria is battling numerous security threats, including a decade-long Boko Haram insurgency, banditry and kidnapping in nearly every part of the west African country.