The 34-second video shows a helicopter flying a red flag over a town. 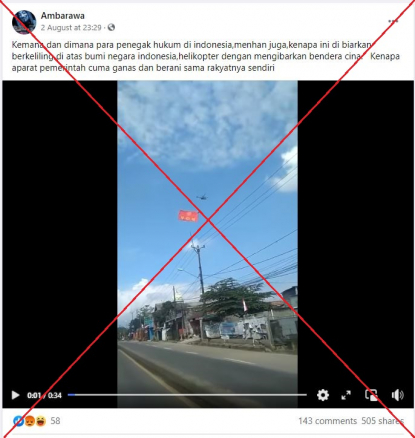 The post's Indonesian-language caption translates to English as: “Where is the law enforcement in Indonesia, the defence minister as well, why is this allowed to fly circling above Indonesia's land, a helicopter flying the Chinese flag. Why are government officials only vicious and tough to their own people?”

The Chinese national flag consists of a red background with a large yellow star and four smaller stars in its upper left corner.

The same footage was also shared alongside a similar claim in other Facebook posts here, here, here and here.

Keyword searches found this video, posted on August 3, 2021, on the official Instagram account of the Indonesian air force.

It shows a helicopter flying a red flag that corresponds to the flag shown in the misleading video.

The caption reads in part: “At the peak of the commemoration of the 76th Anniversary of the Republic of Indonesia on August 17, 2021, the Indonesian air force will fly a giant red and white flag (20x30 meters) using a helicopter over the sky of Jakarta," referring to the Indonesian national flag.

The caption continues: "Since yesterday, Monday, August 2, 2021, a number of Indonesian air force's helicopters have carried out flight training at Atang Sendjaja Air Base, Bogor. This exercise will last for the next 5 days.

The logos printed on the red flag can be seen on the official website of the military units: the Indonesian military headquarters, Indonesian army, Indonesian navy and Indonesian air force.

Below is a screenshot comparison between a scene in the misleading footage (L) and the Indonesian air force's video (R):

The location shown in the misleading footage is in Bogor regency, Indonesia's West Java province, which can be seen here on Google Maps.