This image shows carbon nanotube artwork, not a cross-section of DNA

An image of a series of overlapping circles has been shared hundreds of times in Facebook posts which claim it shows a "cross cut section of DNA". The claim is false; the images show nanotube artworks made by MIT professor John Hart, while experts said it is currently not possible to see DNA in such detail.

"This is a cross cut section of DNA. Its the flower of life and it holds the golden ratio. I bet that blew your mind. It should," reads a graphic posted on Facebook on July 7.

It shows a picture of overlapping circles surrounded by smaller versions of the same shape. The structures appear to have been viewed through a microscope.

"Perfect Godly design. That’s why you don’t mess with it by injecting experimental genetic modification," reads the Facebook post, which has been shared more than 900 times. 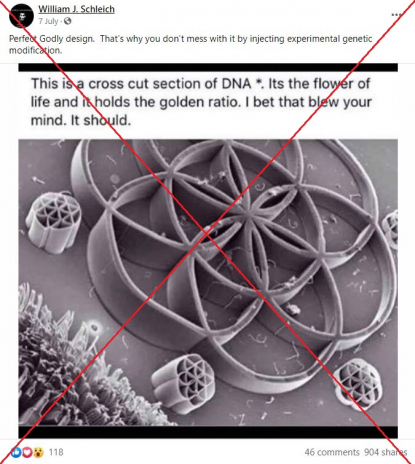 Similar Facebook posts have been shared here and here.

Some posts compared the image to the seed of life, a formation found in sacred geometry, a belief system giving certain symbols and shapes found in nature sacred qualities.

However, the claim is a hoax.

The structures featured in the post are in fact photos of carbon nanotube sculptures created by Professor John Hart from the Massachusetts Institute of Technology (MIT) and described in this Scientific American article.

Carbon nanotubes are tube-shaped molecules of carbon with thermal and electrical carrying properties, which have applications in cutting-edge nanotechnology.

Below is a comparison between the image featured in the Facebook posts (left) and Scientific American's article (right).

Professor Hart said the image featured in the post was one of his carbon nanotube creations, and explained the structure was deliberately modelled on the seed of life.

"It was made to demonstrate the potential to create three-dimensional structures out of carbon nanotubes, here in a visually interesting and widely-known pattern".

In his 2006 thesis at MIT, Hart explained how he grows the structures using a combination of pressure, chemical vapour deposition and catalyst compositions. He also gave a TED talk on the subject in 2010.

Hart’s carbon nanotube structures were documented on his now-archived NanoBliss website, and cached versions of the website include images of his seed of life configuration among other shapes.

His work made headlines in 2008 when he created a series called 'nanobamas', sculptures of then presidential hopeful Barack Obama’s face.

DNA has its iconic double-helix shape due to x-ray diffraction imagery, but scientists have not been able to view DNA in great detail even with modern technology.

"We can't really see that level of detail of [DNA] directly. We can see it, however, indirectly. For example the best microscopy methods, the best in-situ image they can see of DNA is a blurry bit of string," he told AFP.

UK-based researchers have used a form of atomic microscopy which has captured the structure of a strand of DNA, but the highly detailed images of our genetic code are visualisations of data at this point.