An image of a Sri Lankan runner using safety pins to attach her name tag to her shirt at the Tokyo Olympics has been shared in multiple posts, along with a claim implying that the national team's resources are stretched because "60 officials" chose to accompany them. But the claims are misleading -- the Sri Lanka Olympic Committee showed AFP evidence that only 20 officials are accompanying the team; photos from the Games show the use of safety pins to attach name tags for races is not uncommon.

The picture of runner Nimali Liyanarachchi was published on July 31, 2021, after she had competed in heat 4 of the women's 800m the day before.

The post had been shared more than 7500 times before being deleted.

Translated, the Sinhala text superimposed on the image reads:

"Brought tears to my eyes
Even at the Olympics, she has been made to pin her name using safety pins
Only eight athletes but 60 officials "

The Sinhala post caption reads: "No issues, at least the officers got to attend the event" 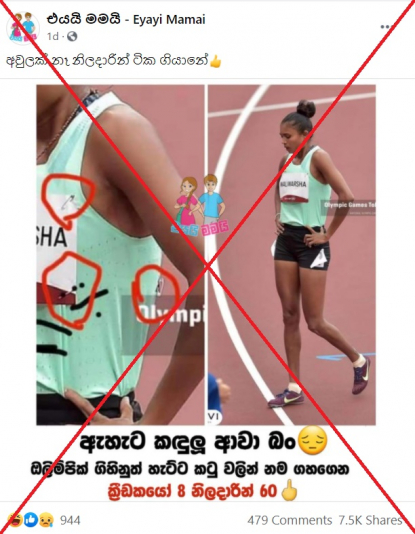 Similar claims using an identical image were made on Facebook - seen here and here - and on Instagram here.

Nine athletes represented Sri Lanka at the Olympics and only 20 officials were accompanying them.

The Tokyo Olympics organisers took strict measures to slash the number of people attending the event this year, including officials, as a measure against coronavirus -- limiting accreditation to those with "essential and operational roles".

In a report published by Sri Lankan newspaper The Daily FT on May 31, 2021, Sri Lanka Olympic Committee Chief Suresh Subramaniam was quoted as saying the number of officials accompanying the athletes was due to be "15 and nothing more".

However, speaking to AFP via Whatsapp on August 6, 2021, Subramaniam said the number had since increased to 20.

Subramaniam said although the Tokyo organisers had initially only permitted 15 officials, the number was then increased because of the requirements of new categories that Sri Lanka competed in this year, such as gymnastics and equestrian events.

"At the very beginning, the organising committee only permittedeight officials for Sri Lanka team due to coronavirus concerns," Subramaniam told AFP during the conversation. He added, however, due to requirements of the Lankan athletes the number had to be increased up to 15 and finally to 20 after several rounds of negotiations as their participation was vital for the performance of the competitors.

He said the team of 20 officials includes coaches and doctors, as well as the veterinarian and the groomer for equestrian event competitor Mathilda Karlsson's horse Chopin VA.

Subramaniam shared the daily PCR test list for the team with AFP, which named the athletes and accompanying officials.

In addition, a closer look at images from athletics events at the Games shows that it is not uncommon for competitors to attach their nametags using safety pins.

Raevyn Rogers - an American athlete who came first in the heat that Liyanarachchi participated in - did so in that same event. 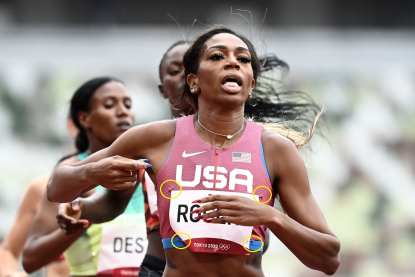 Another example of athletes who used safety pins in a similar way can be seen in this AFP picture of the Jamaican trio -- Shelly-Ann Fraser-Pryce, Elaine Thompson-Herah and Shericka Jackson -- who swept the women's 100m sprint. 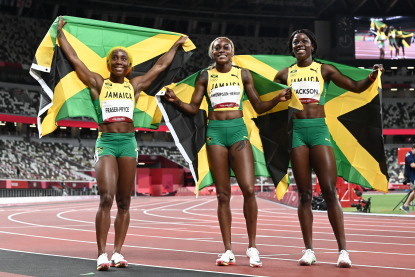