This video was filmed in New York and not in Tokyo

A video has been viewed thousands of times on Twitter alongside a claim it shows a black man assaulted in Tokyo during the Olympics. The claim is false; the video was in fact filmed in New York.

"On a street of Tokyo during the Olympics, a black man chanted Black Lives Matter and was beaten by a Japanese citizen," reads the Chinese-language caption on this tweet posted on July 29.

The video, which has been viewed more than 4,000 times, shows a black man on a bike shouting at crowds. A man then approaches him and punches him repeatedly, continuing the attack as he falls to the ground. 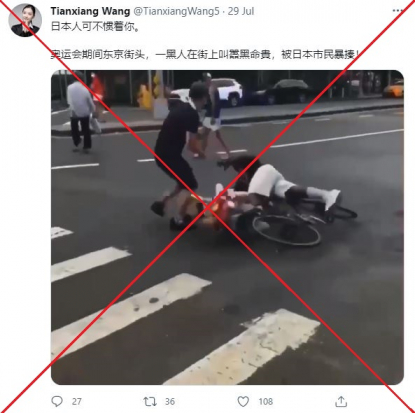 However, the claim is false; the video was filmed in New York, not in Tokyo during the Olympics.

A reverse image search on Google found the same video uploaded here on Reddit on July 26.

Below is a screenshot comparison of the video in the misleading posts (L) and the video posted on Reddit (L):

A further keyword search found the video was also embedded in this July 26 report by news outlet HopClear.

"The incident occurred on July 25th, 2021 on Bowery and Doyer Streets in New York’s Chinatown area," it reports.

The location corresponds to this corner on Google Street View.

Below is a screenshot comparison of the video (L) and Google Street View (R) images, with corresponding features circled in red: