Skip to main content
Mexico's Julian Sanchez falls down next to Mexico's Arantxa Chavez Munoz as they compete in the Mixed 3m synchro springboard final during the diving competition at the 2017 FINA World Championships in Budapest, on July 22, 2017. ( AFP / MARTIN BUREAU)

A video has been viewed hundreds of thousands of times in social media posts claiming it shows a diver falling off the springboard at the Tokyo Olympics. The claim is misleading; the footage shows Mexican diver Julian Sanchez making a blunder at the 2017 FINA World Championships in Hungary.

"A Mexican teammate made a mistake in diving. Social media users: are you joking? Sorry, can't help laughing #TokyoOlympics #Diving," reads a post on Douyin, the Chinese version of TikTok, on July 27. 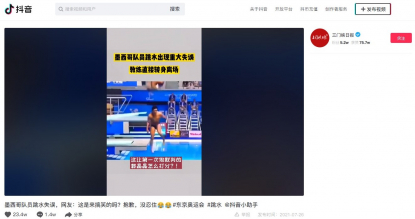 The video shows a male and female diver competing in a synchronised diving competition. They bounce on the springboard in preparation to jump, before the man appears to lose his balance and crashes into the water.

Simplified Chinese language text superimposed on the footage reads, "A Mexican teammate made a huge mistake in diving, the coach immediately left" and "This is the first time Guo Jingjing is judging, how can she grade their performance?!".

A frame-by-frame analysis of the video in the misleading posts found a sign in the background reading "Budapest 2017 FINA", which AFP has circled below in red. 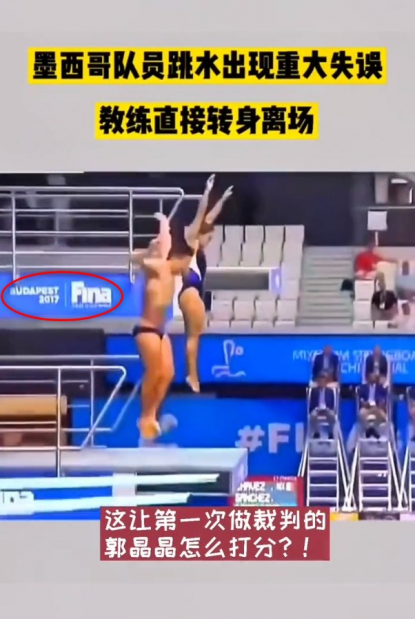 A screenshot, taken on August 2, 2021, of the misleading video with the banner circulated in red by AFP. ( AFP)

Julian Sanchez is a Mexican diver who ranked 7th in synchronised springboard in the 2012 London Games.

AFP also published a photo from the event. The image caption also says the image was taken at the FINA World Championships in Budapest in 2017 and in the Mixed 3m Springboard Synchronised final diving event. 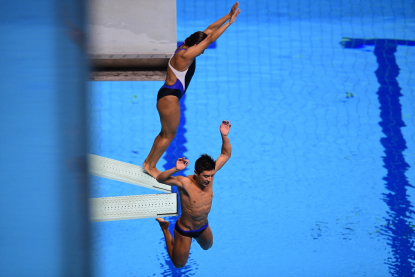 Mexico's Julian Sanchez falls down next to Mexico's Arantxa Chavez Munoz as they compete in the Mixed 3m synchro springboard final during the diving competition at the 2017 FINA World Championships in Budapest, on July 22, 2017. ( AFP / MARTIN BUREAU)

The result of the 17th FINA World Championships was published here on FINA's website. It states the event was held on July 22, 2017, with Sanchez and Chavez Munoz coming 13th.

Sanchez posted on Instagram shortly after the blunder, saying he was "back in Mexico, not with the expected result" and promised to "come back stronger than ever".

He is not set to participate in the Tokyo Olympics, according to a list of athlete's names on the Games's website.

The Tokyo 2020 Olympics has 3m springboard events for men and women, but no mixed synchronised diving competition, according to the schedule.