This video was filmed in India and not Pakistan

A video of a landslide has been viewed hundreds of thousands of times in Facebook posts that claim it was filmed in the town of Naran in northern Pakistan. The claim is false; the video in fact shows a landslide in Himachal Pradesh state in India.

"The scenes of destruction which took place in Naran today," reads the Urdu-language caption to this video posted on Facebook on July 25. 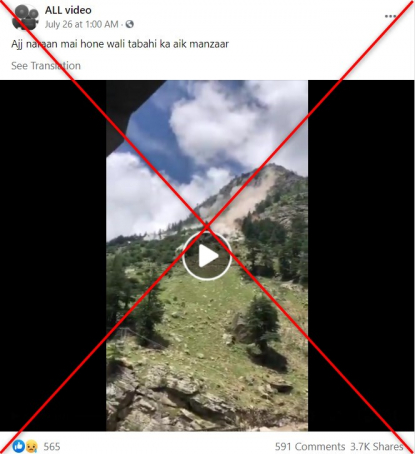 A screenshot of the misleading post taken on July 30, 2021

Similar Facebook posts have been shared here, here and here.

However, the claim is false; the video was filmed in Himachal Pradesh in northern India on July 25.

An identical video could be viewed here on AFP's website.

Its caption reads: "Images show large boulders thundering down a mountain in India's northern Himachal Pradesh region, before smashing into a bridge.

"Nine people were killed and three seriously injured after their vehicle was hit by falling rocks." 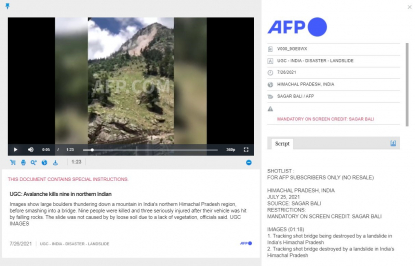 The same video with the correct caption was also uploaded here on the YouTube channel of US broadcaster VOA News on July 27.

The video was geotagged here on Google Maps in Batseri village in Himachal Pradesh.