A fresh claim has circulated on Facebook as the Tokyo Olympics was underway that New Zealand weightlifter Laurel Hubbard, one of the first transgender athletes to participate in the games, suffered a "testicle injury" that prevented her from competing. But this claim originates from a satirical website. Hubbard is set to compete in Tokyo on August 2, 2021. To date, there have been no credible reports of her suffering such an injury. 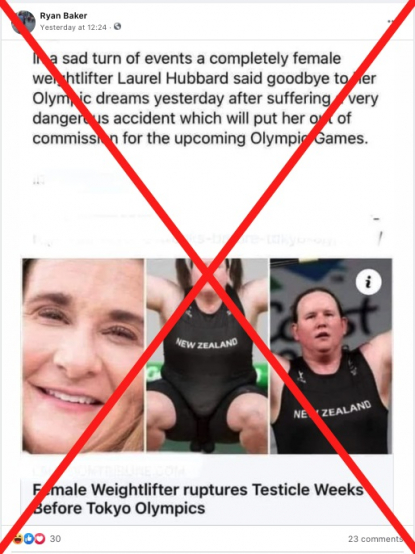 The post shows a photo of weightlifter Laurel Hubbard, who was selected in June to compete at the Olympics by New Zealand officials, AFP reported.

Hubbard, 43 -- who transitioned to female in her 30s -- met all the qualification criteria for transgender athletes, officials said.

A similar photo and claim were also shared on Facebook here and here.

A Google keyword search found the claim corresponds to an article posted here on the website Lampoon Tribune on June 22.

The website includes a disclaimer at the bottom of the page that states: "The Lampoon Tribune assumes all responsibility for the satirical nature of its articles and for the fictional nature of their content."

Below is a screenshot comparison between the misleading image uploaded to Facebook (L) and the screenshot of the Lampoon Tribune article when shared on Facebook (R):

A screenshot comparison between the misleading image uploaded to Facebook (L) and the screenshot of the Lampoon Tribune article when shared on Facebook (R):

As of August 2, 2021 no credible reports indicate Hubbard has been injured prior to the Olympics. She is set to compete in Tokyo on August 2.

AFP has previously debunked here similar fake reports about Hubbard that originated from another satirical site.