Footage of uniformed men dragging a man in handcuffs towards a military van is circulating on social media with a claim it shows Beninese police mistreating detained Nigerian separatist activist, Sunday Adeyemo. The claim is false: the clip was filmed in Mali’s capital, Bamako, after an attempted stabbing of the interim transitional president, Colonel Assimi Goita.

Adeyemo, popularly known as Sunday Igboho, was arrested on July 20, 2021, at the airport in Benin’s commercial capital Cotonou.

The Nigerian separatist, an advocate for independence for the southwestern Yoruba people, had been wanted internationally by Nigeria since early July after secret police raided his home.

“THEY ALWAYS SAY NIGERIAN SECURITY AGENTS ARE NOT CIVIL IN THE TREATMENT OF THE ACCUSED,” reads an Instagram post written in uppercase letters and shared alongside the footage. “NOW WITH THE WAY BENINIOSE SECURITY AGENTS ARE TREATING IBOHO, WE KNOW BETTER (sic).” 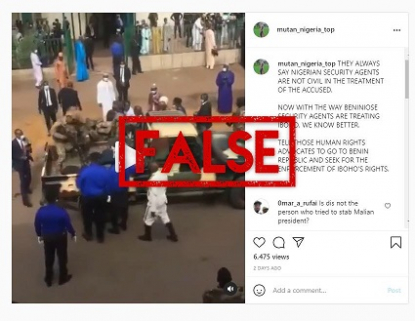 The post has been viewed more than 6,000 times since July 25, 2021, three days after Igboho appeared in a local court in the Republic of Benin.

“TELL THOSE HUMAN RIGHTS ADVOCATES TO GO TO BENIN REPUBLIC AND SEEK FOR THE ENFORCEMENT OF IBOHO'S RIGHTS (sic),” reads another line from the Instagram post as justification for cases of alleged human rights abuses in Nigeria.

However, there is no evidence Igboho was manhandled in Benin. The footage accompanying the Instagram post is unrelated to his current detention.

Using the InVID WeVerify tool, AFP Fact Check ran a reverse image search on keyframes of the video and found the same version of the footage in a story published on July 20, 2021, by the Turkish online newspaper Beyaz Gazete. 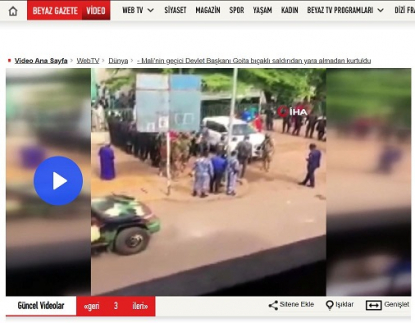 The article describes how Mali’s interim leader Assimi Goita narrowly escaped an attempted assassination by two assailants who tried to stab him. The attack took place during prayers for the Islamic festival of Eid al-Adha on July 20, 2021, at a mosque in Mali’s capital, Bamako, as AFP reported.

AFP photographer Emmanuel Daou, who was at the mosque, photographed one of the alleged attackers after he was stopped by security forces and handcuffed. The man can be seen lying in the back of an army truck, and the angle of the photograph is nearly identical to that in the video. 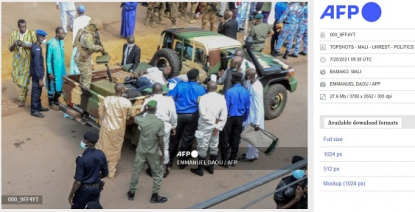 “Security personnel watch an alleged attacker (C) as he lies in the back of a vehicle at The Grand Fayçal Mosque in Bamako on July 20, 2021,” reads the caption on the AFP photo.

Matching elements in the picture and the video include soldiers and security staff in blue uniforms, the spare tyre in the back of the truck and the camoflage on the vehicle.