It had been viewed more than 400 times before it was removed. 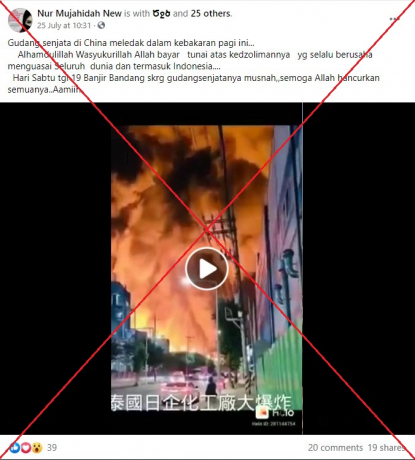 The post's Indonesian-language caption reads in part: "China's armory exploded in a fire this morning...

"Flash Flood was on Saturday, 19th, now the armory is destroyed, may Allah destroy everything... Amen."

Text in traditional Chinese characters that appears throughout the video reads: "Big blast at a Japanese chemical plant in Thailand".

The same video was also shared on Facebook here and here, alongside a similar claim.

The video was also posted here with a claim that it shows an explosion at an aluminium factory in China.

Floods in central China's Henan province in July 2021 killed at least 71 people, including 14 who were trapped in a flooded subway in the city of Zhengzhou, AFP reported here.

An aluminium alloy plant in Henan province exploded on July 20, 2021, after flood waters entered the plant, as reported here and here.

The first clip matches the scenes in this video posted by France-based Berbere Television, on Facebook on August 4, 2020, titled: "Explosions in Beirut".

Translated from French, the post's caption reads: "Explosions in Beirut - A strong explosion rocked the port area of the Lebanese capital, Beirut, at around 5:10 p.m. (1:10 a.m. local time) on Tuesday, leaving dozens injured, according to a security source and correspondents from Agence France-Presse (AFP) on the ground."

AFP also published a video report of the blast in Beirut here on YouTube on August 4, 2020.

Below is the screenshot comparison between the first misleading clip (L) and the Berbere Television video (R):

The second clip is a CCTV footage capturing the moment when a factory exploded in Samut Prakan province, Thailand, on July 5, 2021, which can be seen in this video, published on the website of video licensing agency Newsflare.

The accident killed one firefighter and injuring at least 33 people, AFP reported here.

Below is a screenshot comparison between the second misleading clip (L) and the Newsflare video (R):

The third clip match the scenes seen in this YouTube video posted on July 6, 2021.

Thai Rath newspaper also published a picture in the report about the explosion here, showing the same scene as seen in the third clip.

Below is a screenshot comparison between the third misleading clip (L) and the genuine YouTube video (R):

The fourth clip shows the same scenes in this video uploaded on YouTube on July 3, 2021.

Translated from Korean to English, the YouTube post is titled:  "Major fire breaks out at Kumho Chemical Industry in Sihwa Industrial Complex."

The first paragraph of the post's caption reads: "At around 9:57 pm on the 2nd, a major fire broke out at at the Kumho Chemical Industry, a polyurethane manufacturer, in Sihwa Industrial Complex, and the fire was not completely put out until around four hours later at 2:00 am on the 3rd."

Chosun Ilbo, a major South Korean daily, included the video in this report about the blast in Sihwa Industrial Complex in South Korea's Gyeonggi province.

Below is a screenshot comparison between the fourth misleading clip (L) and the genuine YouTube video (R):

As of July 30, 2021, there is no report of any armory explosion in China following the massive floods.