A photo of an Indian athlete has been shared on Facebook and Twitter — including by Indian celebrities — in posts that claim she won a gold medal at the ongoing Tokyo Olympics. However, the claim is false. The athlete in the image, Priya Malik, actually won a gold medal at the recently concluded Cadet World Wrestling Championships in Hungary in July 2021.

The Tamil-language caption translates to English as: “Gold medal hunt has just begun, the first gold medal has been won by Priya Malik #tokyo #olympics.” 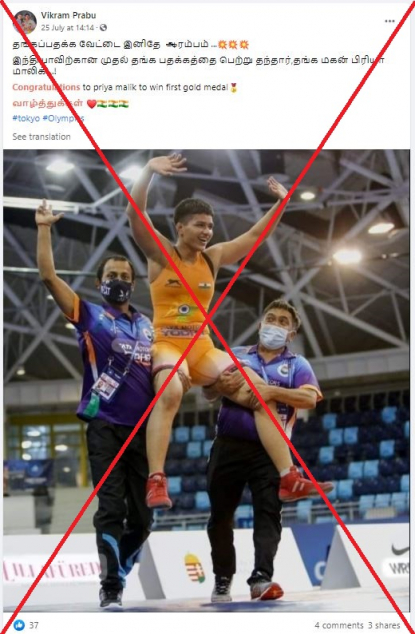 Tokyo 2020 kicked off on July 23, 2021, after the pandemic forced organisers to postpone the Olympic Games by a year.

It is the first Olympics to see athletes compete in front of largely empty stadiums after the city announced a Covid-19 state of emergency.

The image was shared hundreds of times after it was tweeted with a similar claim by Indian celebrities here and here.

A search on Google found the original photo published here on July 22, 2021, on the official website of United World Wrestling (UWW).

Below is a screenshot of the photo on UWW's website: 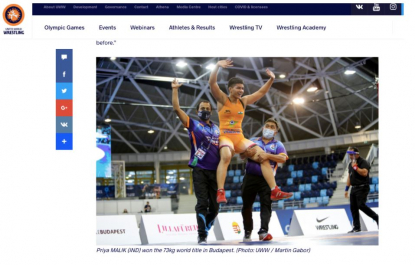 The Cadet World Wrestling Championships were held in Budapest, the Hungarian capital, from July 19 to 25, 2021.

Indian wrestler Priya Malik defeated her opponent from Belarus in the finals of the 73-kg weight category clinching the gold medal.

Footage of her match was also uploaded on UWW's website, as well as on its official YouTube channel on July 23, 2021.

So far, India has only won a silver medal at the 2020 Olympics, according to the Tokyo Olympics' latest medal tally updated on July 29, 2021.