A view of the entrance of the ice cream shop inside the Ben & Jerry's factory in Be'er Tuvia in southern Israel, on July 21, 2021 ( AFP / Emmanuel Dunand)

Facebook posts feature an image of an announcement from US supermarket chain Publix saying it will no longer carry Ben & Jerry's because of the ice cream company's decision to stop sales in occupied Palestinian territories. This is false; Publix says it has not dropped Ben & Jerry's products, and made no such statement on its website or social media accounts.

"Due to the recent statement by Ben & Jerry's We will no longer be carrying their products, effective immediately! We stand with Israel!" reads the text of an image in a July 20, 2021 Facebook post that appears to show a Publix announcement. 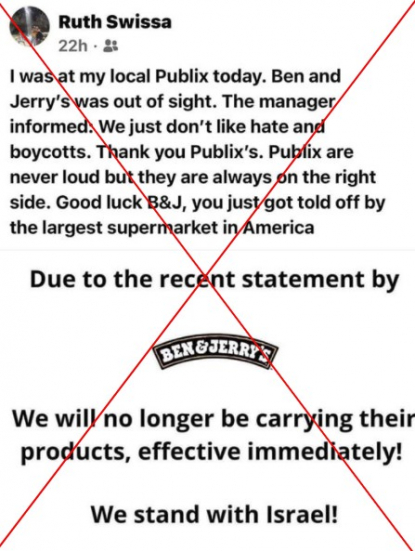 The post, which was apparently first published on a private account, was shared as a screenshot in several Facebook groups, and by a UK page supporting Israel's Likud party. Others shared the image on Twitter.

The purported announcement circulated on social media following Ben & Jerry's July 19 statement saying it would stop selling its products in the Israel-occupied Palestinian territories, namely the West Bank and East Jerusalem, because doing so is "inconsistent with our values." The move prompted a backlash in Israel and parts of the US.

However, Publix -- which did not respond to AFP's requests for comment by the time of publication -- says it does not plan to remove Ben & Jerry's products.

"While we currently don't plan to remove Ben & Jerry's from our stores, we'll continue evaluating products based on sales,"  the company's customer service Twitter account @PublixHelps wrote in response to questions over the authenticity of the claim. 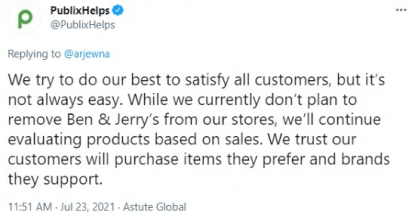 Publix has also not announced on Twitter or on Facebook that it is ceasing sales of the company's ice cream, and its webpage dedicated to news releases makes no mention of Ben & Jerry's.

The fake announcement was shared as the company faces public pressure on Publix to ban Ben & Jerry's products from its stores.

A petition on change.org asking Publix and Winn Dixie, another supermarket chain, to stop selling the ice cream, was signed by more than 450 people at the time of publication.

A search for the words "Publix Israel" on social media monitoring tool CrowdTangle also shows that a Facebook account shared a message encouraging people to email Publix CEO Todd Jones about Ben & Jerry's in at least 10 different groups related to Florida, where the supermarket chain is headquartered. 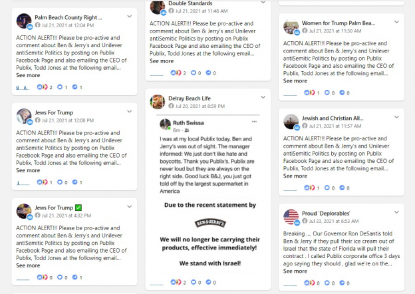 Screenshot of a CrowdTangle search for "Publix Israel" taken on July 23, 2021

On July 20, Israeli Prime Minister Naftali Bennett warned consumer goods giant Unilever, of which Ben & Jerry's is a subsidiary, that the decision would have "severe consequences."

The Israeli government has for years been fighting a BDS movement, which calls for boycott, divestment and sanction of the Jewish state over its policies toward Palestinians.