As thousands took to the streets in Greece to protest new coronavirus measures, social media posts shared what they claimed to be footage of the demonstration. However, the claim is false; the video shows a protest in Athens in January 2019 against a controversial agreement to rename Macedonia.

"Greece Anti Youth [vaccination] Rally. An aerial view, I'd say from these images, the People have had a gutful," reads a Facebook post published on July 16, 2021.

The video shared alongside the post shows a large demonstration, with many people displaying Greek flags. 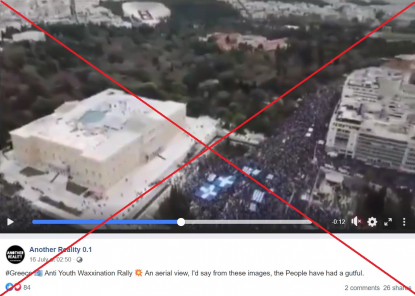 Thousands of people gathered on July 14 in central Athens to protest against new virus measures, after Prime Minister Kyriakos Mitsotakis announced mandatory Covid-19 vaccination for all health workers and people entering closed venues such as bars, cinemas and theatres.

However, the claim is false. The video in fact shows a different protest in the Greek capital in January 2019, many months before the first Covid-19 cases were reported.

A Google reverse image search of keyframes from the video led to this YouTube video from January 21, 2019 about Greeks protesting an agreement to rename Macedonia, now known as North Macedonia.

The title of the video reads in Greek: "Video III - Demonstration for Macedonia. Syntagma Square, 20/01/2019".

Thousands demonstrated in Athen's central Syntagma Square in Athens on January 20, 2019 against Greece's deal with Macedonia that saw it renamed to the Republic of North Macedonia.

Macedonia is a former Yugoslav republic, but for most Greeks, Macedonia is the name of their history-rich northern province made famous by Alexander the Great's conquests.

Below is a comparison between the video in the misleading post (L) and the YouTube video at 0:19 (R):

Similar aerial footage has also been published here in a report about the same demonstration by Greek newspaper Proto Thema on January 20, 2019.

The Greek article's headline reads: "The big rally for Macedonia in 20 photos".

The article translates to English in part: "A gathering of different ages took place in Syntagma [the square in front of the Greek parliament] in the big march for Macedonia. From all over Greece, citizens were present responding to the invitation of macedonian unions and associations against the Prespa agreement."

Below is a screenshot comparison between the video in the misleading post (L) and a photo published in the Proto Thema report(R):