Skip to main content
A woman wearing a protective face mask attends a mosque in the Turkish capital of Ankara on May 13, 2021. ( AFP / Adem Altan)

An image of Turkey’s President Recep Tayyip Erdogan has been shared in multiple posts on Facebook alongside a claim that he announced no mosque in Turkey would be closed due to the Covid-19 pandemic. The claim circulated online in Indonesia after the country imposed social restrictions in early July 2021. The claim is misleading: Turkey previously ordered all mosques to close in March 2020 in a bid to reduce the spread of Covid-19. As of July 22, 2021, AFP found no evidence that Erdogan announced he would not close Turkey's mosques in 2020 or 2021. 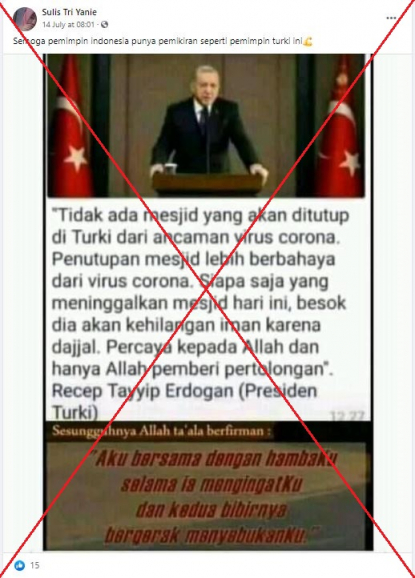 The post's Indonesian-language caption translates to English as: "I hope the Indonesian leader has thoughts like this Turkish leader."

The text superimposed on the picture reads in part: "'No mosques will be closed in Turkey from the threat of the coronavirus. Closing mosques is more dangerous than the coronavirus.

"'Whoever leaves the mosque today, tomorrow he will lose faith because of the False Messiah. Trust in Allah and only Allah will give help'. Recep Tayyip Erdogan (President of Turkey)".

Indonesia imposed tougher social restrictions on July 3, 2021, after Covid-19 cases grew significantly in the country. Shopping malls and places of worship were shuttered in the hand hard-hit islands of Java and Bali, AFP reported here.

On July 9, 2021, however, the restrictions were revised to allow places of worship to open but without communal prayers.

A similar claim, along with the photo, has been shared more than 80 times on Facebook here, here, here and here.

Turkey's Presidency of Religious Affairs announced on its website here on March 19, 2020, that mosques would be closed.

The closures were implemented for Friday, March 20, as well as Saturday, March 21 — when Muslims celebrate the Night of Prophet Mohammed's Ascension.

Turkey also banned communal prayers in mosques during the pandemic from March 2020 until May 2020.

As of July 22, 2021, AFP found no credible report about Erdogan insisting that mosques should remain open throughout the pandemic.

A reverse image search on Yandex followed by subsequent keyword searches found the picture shared in the misleading posts was originally published here on the Associated Press (AP) website on December 3, 2019.

It shows Erdogan delivering a speech before travelling to a NATO leaders summit in December 2019.

The caption reads: "Turkey's President Recep Tayyip Erdogan speaks before departing to attend a NATO leader's summit in London, in Ankara, Turkey, Tuesday, Dec. 3, 2019. Erdogan says there is no change in Turkey's position that is holding up a NATO defense proposal for Poland and Baltic nations until the alliance supports Ankara's concerns related to Syrian Kurdish fighters."

Below is a screenshot comparison of the image in the misleading post (L) and the AP photo (R):