Social media posts have shared a video claiming Ferdinand 'Bongbong' Marcos Jr, the son of a former Philippine dictator, is leading public opinion polls and support for him is getting 'stronger' ahead of the country's 2022 elections. These posts are misleading: the video does not mention any specific poll which Marcos Jr purportedly topped; the most recent surveys by a leading Philippine polling body show him placing either third or second, with nationwide support not getting stronger over time.

The video’s title says: "BBM, now Top 1 in a Survey and Getting Even Stronger! Yellows and Communists are Freaking Out!" 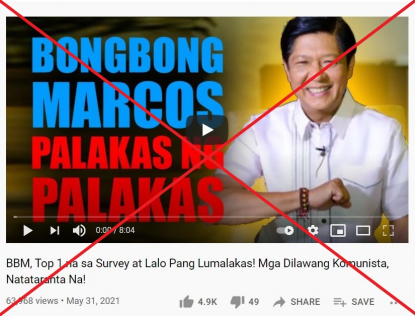 "BBM" is a reference to Ferdinand "Bongbong" Marcos Jr, the son of late dictator Ferdinand Marcos.

"Yellows" is a reference to members and supporters of the political opposition. "Communist" is a term used to label critics of the government.

Marcos Jr said in January 2020 that he would run for office in the 2022 elections, local news outlet ABS-CBN reported, following an unsuccessful bid for the office of vice president during the country's 2016 polls.

Marcos has said since 2009 that he wants to become president of the Philippines as part of his family’s planned political comeback.

The misleading video was also shared alongside a similar claim on Facebook here and here.

It has also circulated online here following the July 13 publication of a nationwide pre-electoral survey.

Comments on the posts indicate some viewers were misled.

"The opposition is now trembling. Don't bother to compete anymore!" one wrote.

Another commented: "Yes! Let’s unite and avenge them! Marcos will have a landslide win!"

The posts however are misleading.

The survey in which Marcos Jr supposedly placed first is not referenced or shown in the video. The video only lists purported reasons why people will vote for him.

But a recent presidential preference survey conducted by Pulse Asia shows Marcos only placed third among possible presidential hopefuls with 13 percent of the vote, with the daughter of the incumbent, Sara Duterte-Carpio, ranking first with 28 percent.

Below is a screenshot of the survey results: 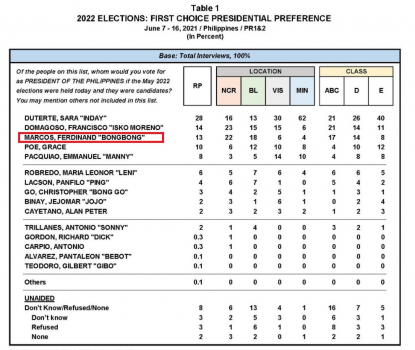 In the two previous polls by the same group in December and April, Marcos had been ranked second with 14 and 13 percent of the vote, respectively -- debunking  the misleading claim that his support was getting "stronger".

Below are screenshots of the two previous poll results: 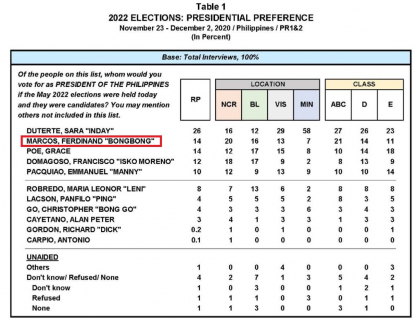 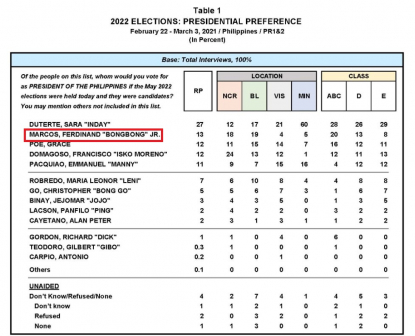 Earlier this year, Marcos lost a legal challenge he had filed against Vice President Leni Robredo in 2016, alleging he was cheated out of victory in the vice-presidential race that year.