This photo was taken in Chiang Rai, Thailand in 2019

As Myanmar battled a shortage of medical oxygen during a third wave of Covid-19 infections, a photo of a baby on a motorbike with an oxygen cylinder circulated in social media posts that claimed it shows a scene in Myanmar. The image, however, has been shared in a misleading context: it actually shows a scene in Thailand in 2019. The child in the picture was suffering from a respiratory illness, not Covid-19, local media reported at the time.

The photo was published here on Facebook on July 12, 2021. It has been shared hundreds of times. 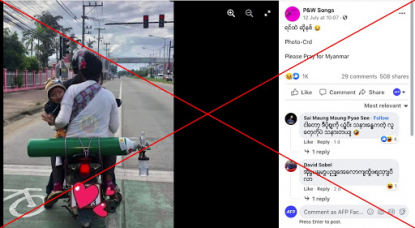 The post’s Burmese-language caption translates to English as: “Feeling so bad in my heart. Please pray for Myanmar.”

The caption reads: “This is heart touching photo of the day pray for Myanmar civilians.

This photo began circulating among Myanmar social media users as the country struggled with a third wave of Covid-19 infections and a shortage of medical oxygen. AFP reported on the crisis here.

But the photo has been shared in a misleading context.

A Google reverse image search found this photo published on July 9, 2019 by a Thai Facebook user.

The post's Thai-language caption translates to English as: "Don't know what to say, can't think of the captions. The child's mother and father are riding for Mae Chan, whoever sees or knows them if you can help them please follow-up on this.

"The weather is so hot. The father turned to adjust the oxygen tank every red light, and there is a lot of traffic now. Thank god for creating true love from people who are called Moms and Dads. At least this is one thing in which everyone in the world is equally lucky."

It said the incident prompted an outpouring of support for the family featured in the image. 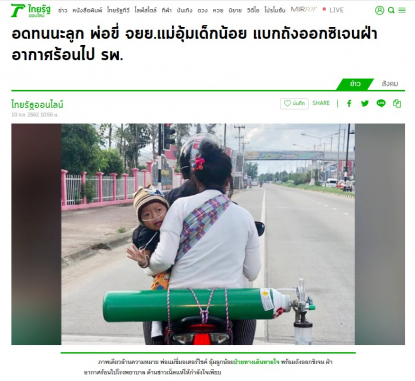 According to another report by Thai media Post Today published on July 10, 2019, the original Facebook photo shows a family in Chiang Rai province carrying their two-year-old child to see a doctor.

The report says that the child was suffering from a respiratory illness and that their family intended to travel to Mae Chan.