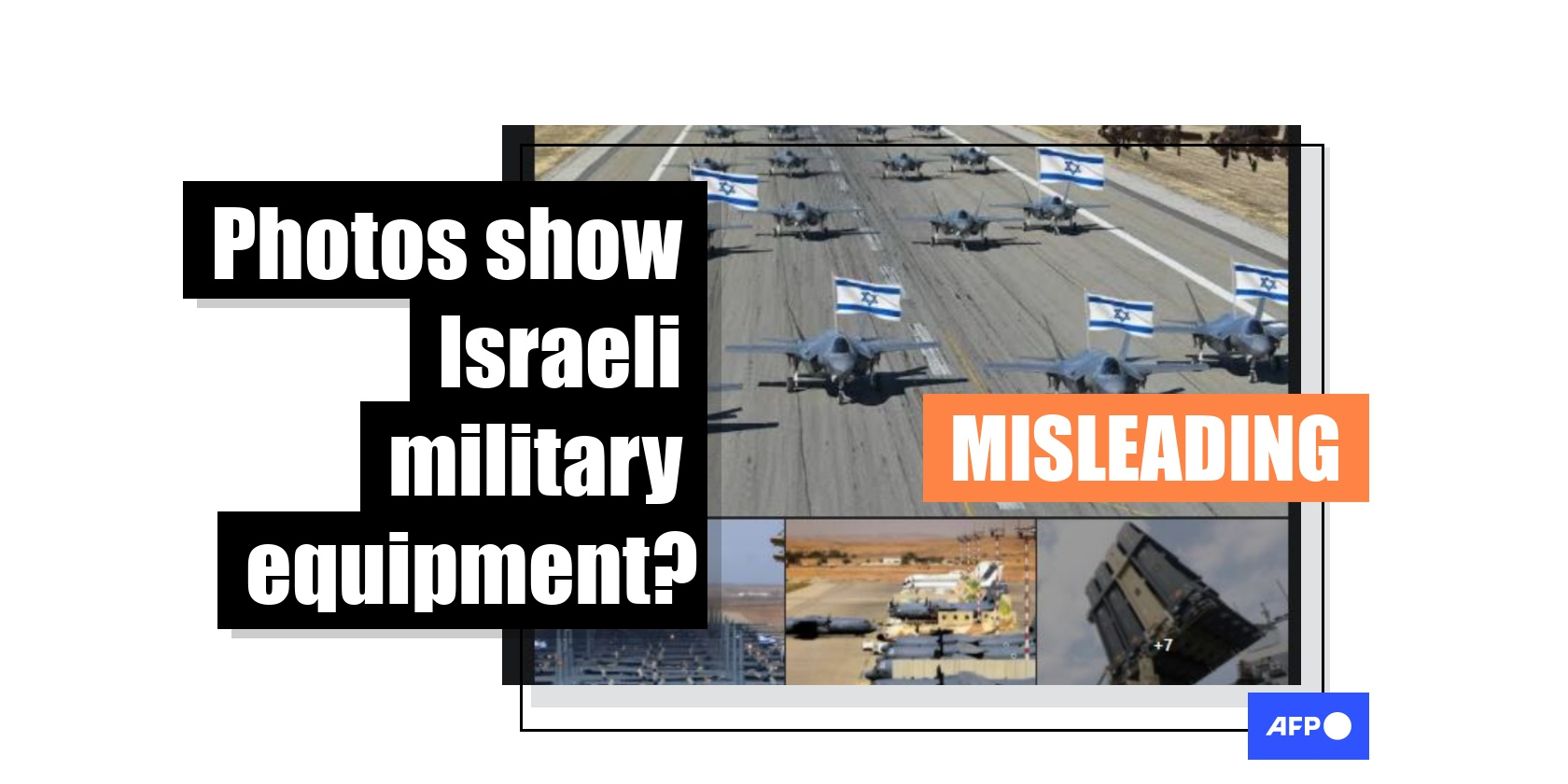 Several images of warplanes and missile systems have been shared on Facebook as claimed evidence of Israel’s military might and superior firepower over Nigeria, where three Israeli filmmakers were recently arrested. The claim, however, is misleading: four of the images show Israel’s Iron Dome missile defence system, but the rest feature various US military weapons. Some of the pictures have had Israeli flags added to them.

Shortly after the three Israeli documentary makers were arrested in Nigeria, a Facebook page called “EAGLE EYES Report” published a post with 10 images of military aircraft and weapons. 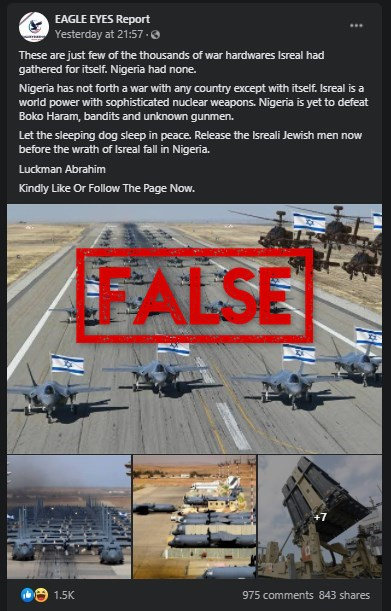 “These are just few of the thousands of war hardwares Isreal had gathered for itself (sic),” reads the Facebook post, shared nearly a thousand times since July 13, 2021.  “Nigeria had none.”

Authorities arrested the trio in a region of Nigeria where Biafran separatists have recently amplified demands for their own state.

The post calls for the release of the three Israelis, adding that “Isreal is a world power with sophisticated nuclear weapons”.

The page behind the post has a history of promoting the activities of Nigeria’s outlawed Indigenous People of Biafra (IPOB), the separatist group whose detained leader Nnamdi Kanu believes the Igbo people in the country’s southeast are a lost tribe of Israel.

AFP Fact Check found that the Facebook post contains several images used out of context or that were otherwise digitally manipulated.

A reverse image search for the first photograph, which shows dozens of fighter jets queued up on a runway, led to the original version published by the US Hill Air Force Base on their website. The image shows US F-35s preparing for an exercise in 2018.

Comparison screenshots showing the altered image on the left

“Pilots from the 388th and 419th Fighter Wings taxi F-35As on the runway in preparation for a combat power exercise Nov. 19, 2018, at Hill Air Force Base, Utah,” reads the caption on the photo.

The original version shows the image shared on Facebook was digitally altered to include eight Israeli flags as well as five low-flying helicopters.

A search for the second photo showing US cargo aircraft also led to the original version on the website of another US Air Force base. Again, the altered version of the picture included the addition of Israeli flags, three jets and two helicopters.

Comparison screenshots showing the altered image on the left

In addition, four other images, while not digitally altered, were found to show either military aircraft or equipment belonging to the United States, not Israel.

The first shows a B-52 Stratofortress strategic bomber at Barksdale Air Force Base in Louisiana. It was published on the base’s website. 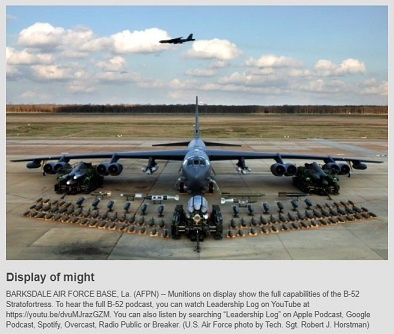 Screenshot taken from a US air force base website on July 14, 2021

While the second photo of several grey airlift planes was taken in Israel, it happened during a joint military exercise between the United States and Israel, using US aircraft. The American flag and “US AIR FORCE” can be seen on the planes. Once more, the photo was published on a US military website. 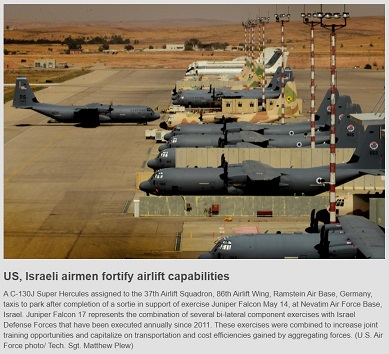 Screenshot showing the US military aircraft in Israel, taken on July 14, 2021

Another image shows a giant Ukrainian-made Antonov An-225 cargo plane containing US-made Oshkosh military trucks being ferried to Israel. The heavy-duty vehicles were brought into the country in 2020 to be fitted with an Israeli air defence system, according to the Israeli newspaper Times of Israel. 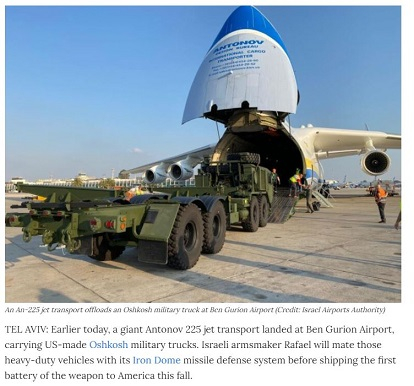 Similarly, a search for the last image, which shows an open cargo plane, led to a 2019 tweet shared by the Israel Defense Forces during a US-European Command military exercise in Israel.

The deployment of this American system in Israel emphasizes the US’s commitment to the defense and security of Israel. It‘s also an opportunity for the IDF to practice integrating advanced American air defense systems into the IAF Air Defense Array. pic.twitter.com/KqbVMA6y9t

Meanwhile, the remaining four images show Israel’s Iron Dome missile defence system. One of them, showing a missile launch, was taken near the city of Ashdod in 2012 by a photographer from the Associated Press news agency

The other three were taken by photographers from the Reuters news agency, including two (here and here) featuring the missile interceptor systems at rest, as well as an image showing streaks of light as the Iron Dome intercepted rockets launched from the Gaza Strip in May 2021.