Skip to main content
Activist Meggan Anderson holds up a sign from inside a Plexiglas tank during a PETA protest outside a Petco shop in Hollywood, California on May 5, 2021. ( AFP / Frederic J. BROWN)

Social media posts claim that animal rights group People for the Ethical Treatment of Animals (PETA) tweeted calling for the removal of a "violent" Instagram page that allegedly shows graphic photos of nature. The claim is false; the tweet is a hoax and was not published by PETA, according to a spokesperson of the organisation and searches in the digital archives of its official Twitter timeline.

"@ruthless.nature are under attack from PETA," reads this Instagram post from June 15. "Please follow them to show them support and to show PETA that internet censorship is not okay!" 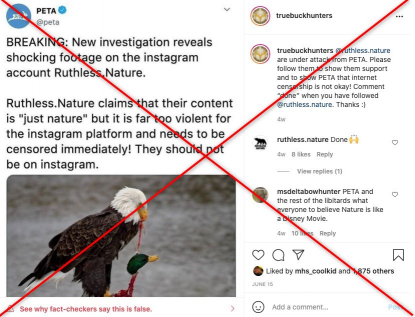 The image appears to show a tweet from PETA criticising an Instagram account called 'Ruthless Nature', which has more than 150,000 followers and posts photos of "the ruthless side of nature".

"BREAKING: New investigation reveals shocking footage on the instagram account Ruthless.Nature," it reads. "Ruthless.Nature claims that their content is 'just nature' but it is far too violent for the instagram platform and needs to be censored immediately! They should not be on instagram."

The image has been shared here and here by pages calling for the support of Ruthless.Nature.

However, the tweet featured in the image is a hoax.

A PETA spokesperson told AFP that the tweet is "fake" and was not posted by the organisation.

AFP Fact Check searched through archived versions of PETA’s Twitter timeline from July 14, June 30 and May 31 on Internet archive tool WayBack Machine, but could not find the tweet.

PETA’s website also makes no mention of an investigation into Ruthless.Nature, nor do archived versions of the website from July 10 or May 16.