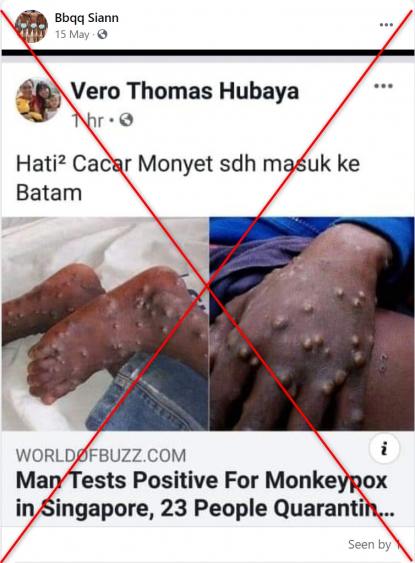 The screenshot shows an Indonesian-language caption that translates to English as: “Be Careful Monkeypox has already entered Batam.”

Batam is an Indonesian island close to Singapore.

The photo was also shared with a similar claim by Facebook users in Chinese, Malaysian and Indonesian languages.

The report shown in the misleading posts is from 2019.

The report shown in the screenshot is headlined: “Man Tests Positive For Monkeypox in Singapore, 23 People Quarantined For 21 Days”.

It was published here by Malaysia-based news website World of Buzz on May 10, 2019.

The monkeypox case in Singapore was also reported here by the city-based media outlet Channel NewsAsia on May 9, 2019.

Singapore’s Ministry of Health (MOH) told AFP on June 29, 2021: “There have been no confirmed cases of monkeypox notified to MOH since the previous imported case in 2019.”

One of the photos, which shows a person's feet, was used as an illustration in this report about monkeypox in Nigeria. It was published by US-based media outlet Face2Face Africa on March 17, 2018.

The other photo, which shows a person's hand, appeared in this article published by the Emerging Infectious Diseases journal in June 2018.

It is titled: “Reemergence of Human Monkeypox in Nigeria, 2017”.

The photo’s caption reads: “Papulopustular rash on hand (A) ... of patient with monkeypox.”

AFP debunked misleading posts about a monkeypox case in Singapore in 2019.