A video claiming that Ugandan President Yoweri Museveni died after being admitted to a Kenyan hospital has been viewed thousands of times and shared in multiple Facebook posts. The claim is false; Museveni has made several public appearances since the rumours surfaced online and dismissed the rumours on camera.

Rumours about Museveni falling seriously ill and dying started on June 27, 2021, in tweets and Facebook posts originating from Uganda and Kenya.

This YouTube video (voiced in Swahili) was published the same day, featuring screenshots of tweets sharing speculations about Museveni. It has since been viewed more than 350,000 times.

“The President of Uganda Yoweri Moseveni [Museveni] died while in Kenya for treatment,” reads the caption on the video, which is about nine minutes long.

In the clip, the voiceover compares Museveni's purported “death” to that of the late Tanzanian leader John Pombe Magufuli, saying that news of Magufuli’s death first spread on social media. 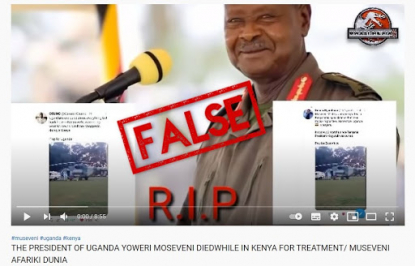 On July 5, 2021, AFP Fact Check debunked a similar claim purporting that the 76-year old president had been “airlifted to a hospital in Germany after collapsing while stepping out of his car”.

Since the rumours first surfaced, Museveni has made multiple public appearances. On the evening of June 27, 2021, he was at an event for the World Health Summit. On July 1, 2021, he joined other African leaders at a virtual UN gathering. And on July 7, 2021, he delivered a keynote speech during the Africa Integration Day opening session at State House in Entebbe, his official residence.

On July 8, 2021, during the swearing-in of new ministers at State House, Museveni dismissed the rumours of his death and called upon the security agencies to locate those perpetrating the falsehoods.

“Another problem we need to solve -- I don’t think it is a security problem but an idiotic problem -- is the social media. The social media has been saying that, apparently, Museveni is dead. So the security service needs to solve that problem. I need to check with them to quickly locate the one who tells such a story because you waste people’s time,” Museveni said at State House.

We need to crack down on the people that are misemploying social media, including the Ugandans abroad. Many are now using it to spread baseless and tasteless news with total abandon. I call upon security to look into this. It must be stopped, get these people. pic.twitter.com/OmIjqEYhTs

The health status of African leaders has often been shrouded in secrecy, leading to speculation and sometimes baseless rumours. Dr David Monyae, the director of the Centre for African-China studies at the University of Johannesburg, attributed this tendency to “political factors” and “the African culture” which he says is “accustomed not to share negative information about people’s health status”.

“Rumours about the health and death of African leaders have a political basis to it and the reason it is clouded in a lot of secrecy is that these leaders privately go-ahead to seek medical services abroad -- and this is because of the lack of infrastructure in their own countries. We have seen this with leaders like the late Zimbabwean President Robert Mugabe, [or Nigerian leader Muhammadu Buhari,” Monyae told AFP Fact Check on July 9, 2021. “Their going to seek medical services abroad portrays the country in disarray and the opposition will always come in and try to fill the gap and fuel the speculations further.”