A screenshot of a tweet, in which former US president Donald Trump allegedly calls Kenya "corrupt" and Nigeria "the devil", has been shared hundreds of times on Facebook in Nigeria. But the claim is false: AFP Fact Check found that the tweet was posted on an impostor account not affiliated with Trump.

The screenshot was published here and here on Facebook on July 3, 2021, and has since been shared nearly 1,300 times. 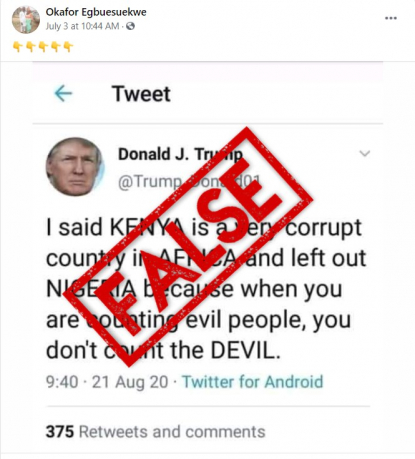 Screenshot of one of the Facebook posts, taken on July 6, 2021

“I said KENYA is a very corrupt country in AFRICA and left out Nigeria because when you are counting evil people, you don’t count the DEVIL,” reads the text of the image.

The claim started circulating on social media under the hashtag #Biafra after authorities announced on June 29, 2021, that they had arrested separatist leader Nnamdi Kanu abroad and brought him back to Nigeria.

Kanu is the de facto leader of the Indigenous People of Biafra (IPOB), who have been pushing for an independent state for the indigenous Igbo people in southeastern Nigeria since 1970. He had jumped bailed in 2017 and disappeared, only to reappear in Israel and Britain.

AFP Fact Check found that the Twitter account in question is fake and not associated with Trump who was permanently suspended by Twitter on January 8, 2021. Prior to the ban, his official Twitter account was verified with a blue tick. His username was @realDonaldTrump, not @Trump_Donald01, the handle used by the imposter.

All tweets from Trump's now-closed account have been archived and can be accessed here.

AFP Fact Check combed through the messages from August 21, 2020, and did not come across the tweet in question. The archives include deleted tweets.

Screenshot of the suspended impostor account, taken on July 6, 2021