A post shared on Facebook in South Africa alleges that President Cyril Ramaphosa and his deputy David Mabuza fled the country after former leader Jacob Zuma was handed a jail sentence, leading to unrest by his supporters. But the claim is false: the two leaders were already out of the country by the time the post was published. Ramaphosa was attending the state funeral of Zambia's ex-president Kenneth Kaunda in Lusaka, and Mabuza has been in Russia for undisclosed medical treatment. 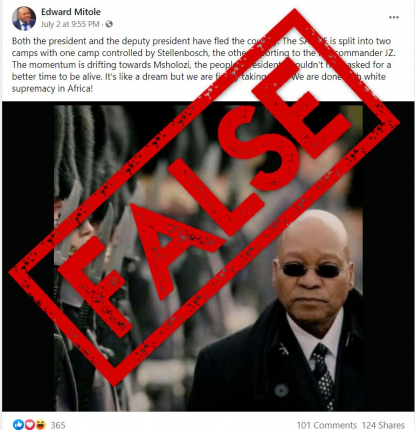 It features an image of former South African president Jacob Zuma, who was handed a 15-month jail sentence for his refusal to appear before graft investigators on June 29, 2021.

“Both the president and the deputy president have fled the country [...] The momentum is drifting towards Msholozi (Zuma), the people’s president,” the caption reads. “I couldn't have asked for a better time to be alive. It's like a dream but we are finally taking over.”

Zuma, 79, was ousted as president in 2018 after nine years in power amid mounting corruption scandals, which are now being investigated by a commission headed by former judge Raymond Zondo. Zuma was given five days to report to jail after his refusal to appear before the inquiry.

While Zuma’s supporters vowed to prevent authorities from arresting him, the claim that Ramaphosa and Mabuza have fled the country is false.

Ramaphosa in Zambia for funeral

The post was published on the same day Ramaphosa joined other world leaders in Lusaka to attend the state funeral service for former Zambian president Kenneth Kaunda, who died on June 17, 2021, at the age of 97.

As per protocol, Ramaphosa appointed South Africa’s Minister of Basic Education Angie Motshekga as acting president for the day, as Mabuza was already in Russia for treatment for an undisclosed medical condition.

“The appointment has been made in view of the President’s visit today to Lusaka, Zambia to attend the State Funeral Service for the late President Kenneth Kaunda,” read a statement issued by South Africa’s Office of the President on July 2, 2021.

AFP filmed  Ramaphosa and took pictures of him at Kaunda’s funeral. 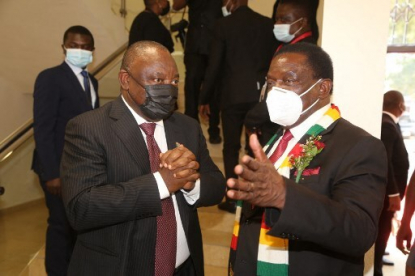 Ramaphosa left Zambia soon after the funeral service was concluded on July 2, 2021, and flew back to South Africa.

Mabuza, meanwhile, requested to take leave on June 26, 2021, to travel to Russia for medical treatment.

Presidential spokeswoman Matshepo Seedat told AFP Fact Check on July 6, 2021, that the deputy president had not yet returned.

“Mabuza is not yet back in the country, and at this moment I can’t tell you when he is expected back but we will keep the media updated on the matter,” she said.