As violence escalated in Myanmar following February's coup, a photo surfaced in Facebook posts purporting to show a bomb in Yangon's Insein township on June 28, 2021. The image has been shared in a misleading context; it actually shows an explosion that rocked a different Yangon township the previous month. 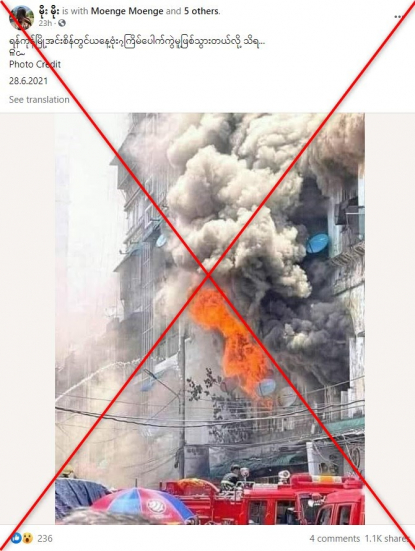 Explosions have been reported across Myanmar as resistance against the military intensified following February's coup.

The country has been in turmoil since the military ousted civilian leader Aung San Suu Kyi, bringing an abrupt end to Myanmar's short-lived experiment with democracy.

The power grab triggered a massive uprising which authorities have tried to quell with lethal force and live ammunition.

However, the post is misleading; AFP found no official reports of explosions in Insein township on June 28, 2021.

The photo in the posts in fact shows an explosion in a different township the previous month.

It was published by Myanmar news outlet Irrawaddy here in a tweet is about a fire in Panbedan township in downtown Yangon.

The tweet reads: “A heavy fire broke out at around 11am on Konzaytan Street, Pabedan Township in Yangon. Residents said the fire started at a pharmacy selling traditional herbs. Firefighters extinguished the blaze by around 1pm. (Photo:CJ)”.

Below is a screenshot comparison of the image in the misleading post (L) and the image published by Irrawaddy news (R): 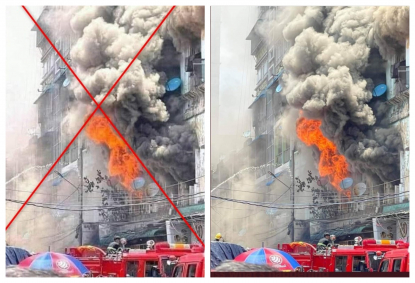 As of June 18, 2021, there have been 293 explosions across Myanmar following the military coup, according to The Armed Conflict Location and Event Data Project (ACLED).