In the aftermath of Hurricane Dorian, a striking image of one home still standing amid the devastation was shared with the claim that the house is in the Bahamas. The claim is false; the photo is from 2008 and it shows a home that survived Hurricane Ike in Texas.

“Bahamas!” reads the caption of a Facebook post shared 760 times since September 3, 2019. The image shows one house in a completely flooded area. 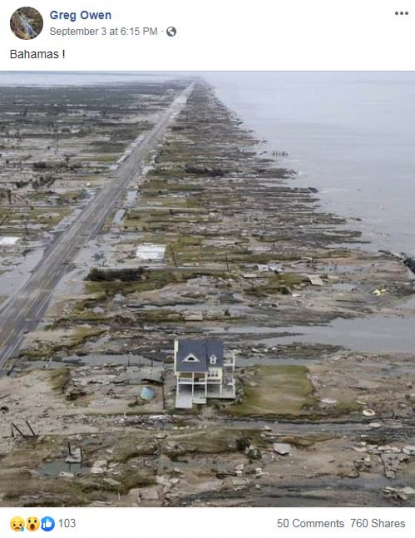 Hurricane Dorian hit the Bahamas on September 1, 2019, as a Category 5 storm, the strongest tropical cyclone on record to make landfall in the Bahamas. On September 2, the Red Cross said that as many as 13,000 houses may have been severely damaged or destroyed across the islands of Abaco and Grand Bahama. According to this September 10 AFP report, the storm had killed at least 50 people in the Caribbean nation.

However this image is not of a home in the Bahamas. A reverse image search in Google leads to this Getty Images page with photos taken on September 14, 2008, in Gilchrist, Texas.

The photo caption reads: “A home is left standing among debris from Hurricane Ike September 14, 2008 in Gilchrist, Texas.”

The photo was taken by Smiley N. Pool. The same home features in another photo on his personal website.

Pool’s images were shared with several news agencies, including AFP. Here is the house from a slightly different angle on AFP Forum. 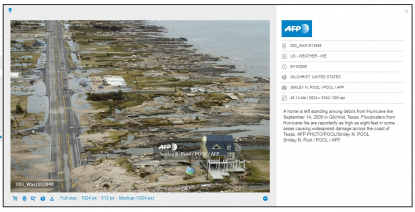 The caption of the AFP photo states: "A home is left standing among debris from Hurricane Ike September 14, 2008 in Gilchrist, Texas. Floodwaters from Hurricane Ike are reportedly as high as eight feet in some areas causing widespread damage across the coast of Texas. AFP PHOTO/POOL/Smiley N. POOL".

According to the US National Weather Service, Hurricane Ike made landfall as a Category 2 storm on September 13, 2008, near Galveston, Texas.

The “last home standing” was the subject of this CNN news report, after the aerial photographs were taken.

In 2018, 10 years after Hurricane Ike, a Houston, Texas TV station reported that the home was still standing and available to rent as a vacation property.

This video shows the aftermath of a stabbing in Jakarta, Indonesia

This video shows a roof collapsing at a mall in Shanghai, China in August 2019