A video purportedly shows images of a man being set on fire has been viewed nearly 130,000 times in multiple Facebook and Twitter posts and online articles alongside a narration that claims the person was in fact a stuntman acting out a scene. The claim is false; Hong Kong's Hospital Authority and police confirmed the man was critically injured in the fire; a Hong Kong media personality had admitted having recorded the audio track in the misleading video, and had since retracted his remarks.

The one minute and 18 second video includes images of a man on fire and photos of Hong Kong media personality Stephen Shiu.

The video’s traditional Chinese-language caption translates to English as: “[Ma On Shan man who was set on fire is a stuntman! Stephen Shiu's professional analysis from a film producer’s perspective] [How-could-this-be series]”.

The traditional Chinese-language text seen at the beginning of the video translates to English as: “Film producer Stephen Shiu speaks out: Ma On Shan burning man is a stunt actor”. 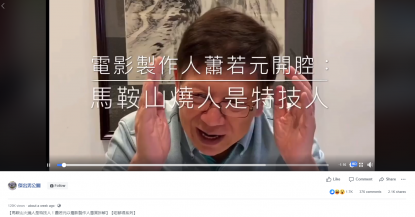 The misleading Facebook post refers to an incident that happened in Hong Kong’s Ma On Shan district on November 11, 2019, in which a man was doused with a flammable liquid and set ablaze. This AFP report gives more details of the incident.

Videos of the fire were filmed by bystanders and posted online, and one of those clips was included in this video report published by Bloomberg on November 11.

A man can be heard speaking in Cantonese in the misleading video, which translates to English in part as:

"Today's situation is very dangerous and it is going to be just as serious in the coming days, so all of you, think about whether you want to stay or leave.

"I recorded this message specially because I can't really speak publicly about it. Please share this immediately.

"The video of a man being set ablaze today is fake. It was a movie set. I make movies so of course I know. The first person seen in the video is not the same as the second one, who is a stunt actor.

"See how the colour of his face seems a bit off? He was wearing anti-burn barrier gel on his face, and something else on his body, that's why he caught fire so quickly.

"When the camera moves, he dashes to the other side where a fire extinguisher has been prepared to douse the flames. So when the camera pans over slowly, it only shows the fire, but not the man. Humans can't be burned for so long, understand?

"This video was filmed beforehand. If anyone believes the burning man is real, ask him/her where that man is now, ok? Everyone, you must share this information."

The claim is false; Hong Kong’s Hospital Authority said the man in the video was taken to hospital in a critical condition after being burned by a fire.

The Hong Kong Hospital Authority published this statement about the incident on November 11, 2019.

The traditional Chinese-language text translates to English as: “[Clarification] Hospital Authority responds to online rumours about a patient with burn injuries

“Regarding an audio recording circulating on social media which claims a person faked a burn injury, the spokesperson for Hospital Authority (HA) made the following clarification:

“The Prince of Wales Hospital in Sha Tin received a severely burned patient this afternoon (November 11). The patient is currently in the intensive care unit at the hospital in critical condition.

“The HA calls on the public to stop sharing untrue information." 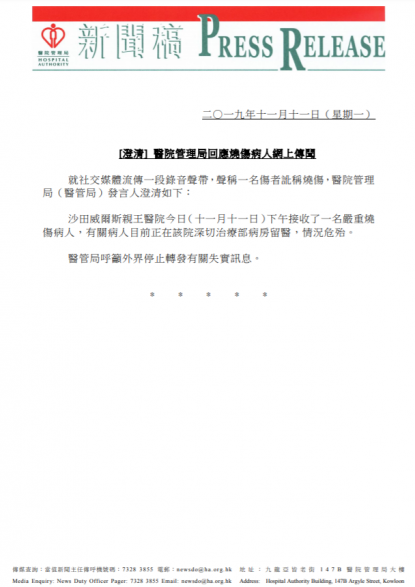 Screenshot of the statement

Hong Kong media personality Stephen Shiu had admitted having recorded the audio track and retracted his comments in this video uploaded to his YouTube channel memehongkong on November 11, 2019, alongside the title "Stephen Shiu's correction and apology regarding the Ma On Shan burning man incident".

Speaking on camera this time, Shiu's remarks translate from Cantonese to English as: "Dear fellow netizens and members of the public, this afternoon I saw the video of a man being set on fire. At the time I noticed the fire spread very quickly and afterwards, the man appeared unhurt.

"So in an audio recording I sent to my friends, I said I suspected that person might be a stunt actor and that the fire was not real. Later in the day I came across news reports and other videos, which said the person is in a critical condition in hospital. Also, some doctors have explained to me the man appeared uninjured at the beginning of the video, but that isn't the case as he could have internal infections.

"Based on that, first of all, I am here to take back what I said unconditionally, and apologise for misleading you. This is unconditional.

"On the other hand, I've never been in favour of revenge. Whoever did that should be punished by the law. They have also severely dampened the spirits of the protests as well as the whole movement.

"I'm not trying to defend myself but of course the same applies to those who stabbed pro-democracy protesters, causing their intestines to spill on the ground. They should also be punished by the law and condemned by public opinion, right?"

Hong Kong Police gave a statement about the incident in a press conference streamed live on the force’s official Facebook account here on November 11.

At the ten minute and 12 second mark of the video, police spokesman John Tse's comments in Cantonese translate to English as: “There are even people who doused a man with a flammable substance and set his whole body on fire."

Tse also said at the 11 minute and 48 second mark of the video: “Now the injured person has been sent to hospital for treatment, and is in critical condition. The case has been referred to the Regional Crime Unit of New Territories South."