A graphic has been shared hundreds of times in multiple posts on Facebook, Weibo and in online forums which claim it shows almost 60 per cent of votes cast in the Hong Kong district council election were invalid. The claim is false; the Hong Kong Registration and Electoral Office (REO) said that 12,097 votes cast were invalid, which represents 0.41 per cent of the total vote.

The misleading graphic was published here in a post in a Hong Kong Facebook group called "Alliance in Support of our Police Force"  -- which has more than 50,000 members -- on November 26, 2019.

It was published two days after Hong Kong’s district council elections, which saw pro-democracy candidates win an overwhelming majority of 452 elected seats in the city’s 18 district councils.  Here are the official results.

Here is an AFP report about the elections, which were held during the sixth consecutive month of pro-democracy protests in the semi-autonomous territory. 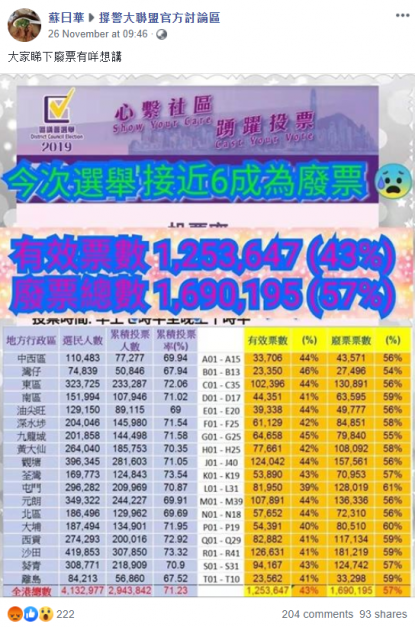 The misleading graphic includes a banner at the top, which can be seen here on the homepage for the Hong Kong district elections website.

The table purports to show the district council election’s voter turnout rate; votes cast and invalid votes for each of Hong Kong’s 18 districts.

According to the table, 57 per cent of votes cast were invalid.

Green text underneath the top logo bar in traditional Chinese characters translates to English as: “During the election this time, nearly 60 percent of the votes are invalid”.

The Chinese-language caption alongside the post translates to English as: “Everyone what do you want to say after seeing those invalid votes?”

"In general, ballot papers in ballot boxes are not counted for the following reasons:

Ho added that details of the breakdown of the uncounted ballot papers for the election will be included in the election report, which will be submitted to the Chief Executive within the next three months.

The full results of the election, including the exact number of votes received by each candidate, can be seen here.

A keyword search on the official election website led to this November 26, 2019 statement on the Hong Kong government website.

The statement reads in part: “There are online rumours that the voter turnout in an individual constituency is greater than the number of registered electors of the constituency, and the number of invalid ballot papers is about 1.6 million.

No, this photo has circulated in reports since 2018 about a man who was attacked in Malaysia