An image of a Hong Kong pro-democracy activist covered in blood has been shared repeatedly in multiple Facebook, Weibo and Twitter posts which claim a local hospital said he faked his injury after an alleged assault in October 2019. The claim is false; the hospital denied issuing the statement; Hong Kong police have said that the activist suffered genuine injuries in the attack.

The image was published here on Facebook on October 17, 2019 in a public group with more than 8,000 members.

It shows a screenshot of a Weibo post on October 16, 2019. The post’s simplified Chinese characters can be translated to English as: “#AntiViolenceRescueHongKong# Jimmy Sham acted again as expected, big liar!”

Jimmy Sham is a Hong Kong pro-democracy activist, who was attacked by around five men in Hong Kong’s Mong Kok district on October 16, 2019, as reported by AFP here. 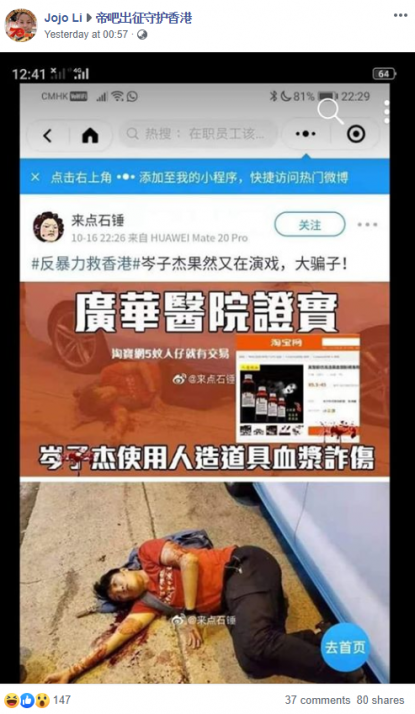 The post includes a photo of Jimmy Sham after he was attacked which was published in this report by Hong Kong news site Hong Kong Free Press on October 16, 2019.

The orange-background picture at the top of the screenshot in the misleading post contains traditional Chinese characters which translate to English as: “Kwong Wah Hospital confirmed” and “Jimmy Sham used man-made blood to make up his injury”.

A product image for fake blood sold on Chinese e-commerce site Taobao has been included on the right-hand side. Next to the Taobao image, the traditionial Chinese language characters translate to English as: “5 RMB on Taobao can make the deal”.

The original October 16, 2019 Weibo post contained in the screenshot was published here. 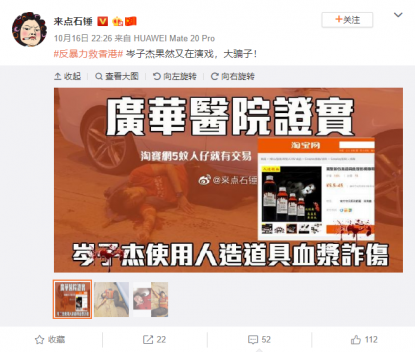 The image with text about Kwong Wah Hospital’s confirmation has appeared in multiple posts, such as here, here, here and here on Facebook, and has been included in this tweet.

The claim is false; the local hospital denied claiming Sham faked his injuries.

Kwong Wah Hospital published this statement on its website on October 17, 2019 about the false claim circulating on social media.

“The hospital did not issue statement on this issue, and did not find the patient using man-made blood. We hope people could stop spreading related misinformation.”

"Mr. Sham was later sent to Kwong Wah Hospital, and he was still awake at that time. Now he is receiving treatment at Kwong Wah Hospital. And we basically know that both his right rear of head and right forehead have three-centimetre wounds, and both of his elbows have been scraped."

An update was published about Jimmy Sham’s injury on his Facebook page here on October 17, 2019.

The text from the post can be translated as: "Message from Jimmy Sham at hospital:

"I'm done with stitching and wound treatment. Thanks for the careful, tender and professional treatment from medical staff!

"Seeing comrade-in-arms at hospital, I feel the love from you all. But sorry for making you guys worried! I will recover as soon as possible, and keep insisting the goal of five demands, insisting the idea of peace, reason and non-violence!

"Police please help find out the murderers behind, that is the responsibility of police force! But still thanks for arriving quickly at the scene this time!

"Everyone please don't hate those who are also supressed, the key problem always lies in system and power. Only independent investigation committee can restore the truth, and only from truth can we rebuild the system!

"I love you guys, hope we have peace in mind at this moment."