Skip to main content
A parishioner holds up a communion cup while wearing protective gloves during a Sunday morning service at a church in Houston, Texas in April 2020 (AFP / Mark Felix)

Holy communion has not been banned in Toronto

Articles shared hundreds of times on Facebook in multiple countries claim that holy communion has been banned in Toronto as part of the Canadian city’s response to the coronavirus pandemic. These claims are false, according to Toronto Public Health, Ontario’s Health Ministry and the Catholic and Greek Orthodox Archdioceses of Toronto.

One post has been shared by multiple accounts since July 8, 2020. Versions of the post link to different articles (here, here) and a July 5 YouTube video of a priest in the Greek Orthodox Church of St Nicholas in Toronto. In it, he claimed that the City of Toronto “forbade the holy communion” and said that “it looks like the persecution of the church” continues.

The claims were also shared in Russia and the United States.

This link was also shared in a now-unavailable tweet by Fox News host Laura Ingraham. 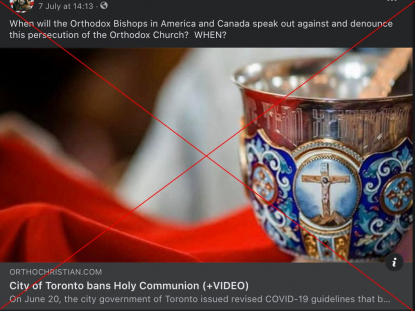 These claims are false and both the Greek Orthodox and Catholic Archdioceses of Toronto have worked with health authorities to ensure communion could continue safely.

In March, places of worship in Toronto were instructed by the Province of Ontario to close in response to the coronavirus pandemic which saw 15,377 confirmed cases and 1,150 deaths in the city.

They were allowed to reopen at 30 percent capacity when the city entered stage 2 of reopening on June 24.

The advice issued by the province on June 15 and by the city on July 8 said places of worship should “suspend activities that increase risk of disease transmission,” ranging from sharing books to prayer mats and communion materials.

Holy communion was not banned and was not singled out from other faith practices in the public health suspension.

Archbishop Sotirios said he contacted government officials to discuss a protocol for communion in accordance with public health advice. This “was accepted by government authorities in Canada and on Sunday, July 12, 2020, the priests in our churches gave Holy Communion with a separate spoon for each believer,” he said,

“It  is  noted  here  that  all  Christian  churches,  as  well  as  places of  worship  of  all  other  religions,  have  received  and  continue  to  receive the same treatment on behalf of government authorities.” added Archbishop Sotirios.

The same is true of Catholic churches in Toronto.

“Churches in the Archdiocese of Toronto re-opened for public worship in mid-June. We have distributed Holy Communion in the hand only [as opposed to directly in the mouth] during this time of pandemic,” Neil MacCarthy, Director of Communications for the Archdiocese of Toronto, told AFP by email. The Catholic archdiocese also set out a protocol which was approved by health authorities, as explained in this tweet.

Ontario Premier Doug Ford announced that, as of July 31, 2020, Toronto would progress to Stage 3 of reopening with churches and other religious facilities continuing to operate at 30 percent capacity.