Skip to main content
A women feeds her grandson in Divisoria Market in Manila on June 8, 2016. (AFP / Noel Celis)

A graphic has been shared repeatedly in multiple posts on Facebook and Twitter alongside a claim it shows guidance issued by the World Health Organization (WHO) about seven “habits” that pose the greatest risk of brain damage. The claim is false; the WHO told AFP it did not issue the graphic; multiple health authorities say brain health is not determined by social factors alone and is also influenced by genetics.

The WHO logo can be seen at the bottom of the graphic. 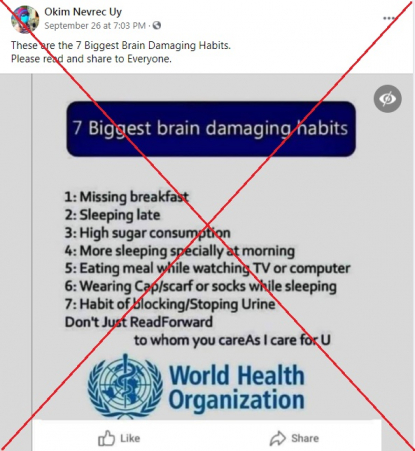 A screenshot of the misleading post, taken on October 12, 2020

In response to the claim, a WHO representative for the Philippines told AFP in an October 12, 2020 email: “[The graphic] did not originate from the World Health Organization.”

According to this factsheet on the WHO’s website, “Numerous interconnected social and biological determinants (incl. genetics) play a role in brain development and brain health.”

The US Centers for Disease Control and Prevention also advises in this information sheet that “besides age, other risk factors [for damaging brain health] include family history, heredity, education level, head injury, exposure to pesticides or toxins, physical inactivity, and chronic health conditions such as heart disease and stroke, diabetes, and high blood pressure.”