Skip to main content
The Facebook and WhatsApp applications' icons are displayed on a smartphone on February 20, 2014 in Rome. Photo by Gabriel BOUYS / AFP.

Multiple social media posts shared in January 2021 claim that a malicious video entitled “Argentina” is circulating on WhatsApp and will hack your phone within 10 seconds. Most of these posts attribute the warning to Pakistan’s National Information Technology Board (NITB). The claim is misleading:  the message is a hoax which has previously circulated in several other countries. Online archives show the NITB tweeted a warning about the hoax message on January 11, 2021 but later removed it.

“NITB Cyber Alerts,” reads a Facebook post shared on January 11, 2021 by Facebook page TechRupt, which has more than 100,000 followers.
“A malicious video named " Argentina" is circulating on WhatsApp that shows how the COVID-19 curve is flattening in Argentina. Do not open the link as it hacks your phone in 10 seconds & it cannot be stopped in any way.” 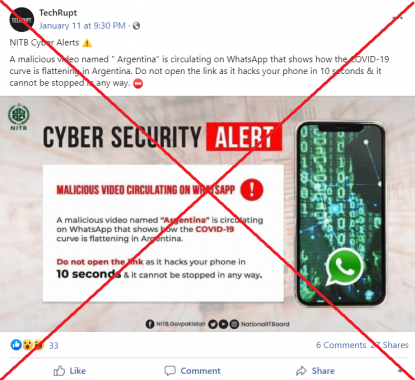 The claim in the posts is misleading.

A keyword search on Google showed that the NITB removed its warning about the hoax message.

A digital archive of the NITB's tweet can be seen here on the Wayback Machine. 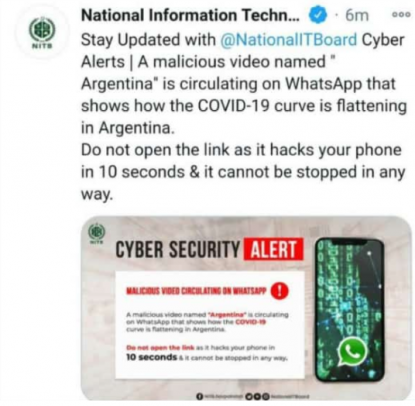 This article on a Pakistani blog features includes an embed of the original tweet which is no longer accessible. 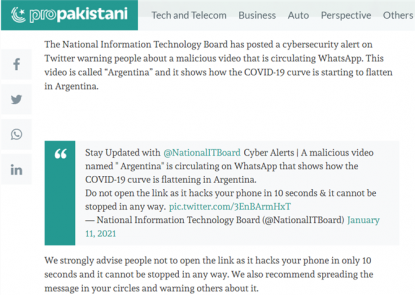 A screenshot taken on January 14, 2021 of ProPakistani blog post

The same misleading warning message has previously circulated on social media around the world, including in Argentina, Nigeria, the Philippines and the US. AFP debunked the message as a hoax.

"The message warns the recipient not to open a video file called "Argentina Is Doing It" as it will hack their phone in 10 seconds,” it said in a Facebook statement on July 18, 2020. "This message has been identified as fake.”