A graphic aired by Hong Kong channel TVB appeared to show that countries including Canada, the UK and New Zealand had postponed key elections due to the novel coronavirus. The graphic was broadcast after Hong Kong delayed its September elections for a year because of the pandemic. Some social media users criticised TVB in posts on Facebook and Twitter for what they claimed was a false comparison. Of the four countries listed in the graphic only New Zealand has postponed its national election -- the other countries have postponed local elections. TVB corrected the graphic but said the social media posts were a "smear tactic".

The screenshot of the graphic was published on Facebook here on August 17, 2020. 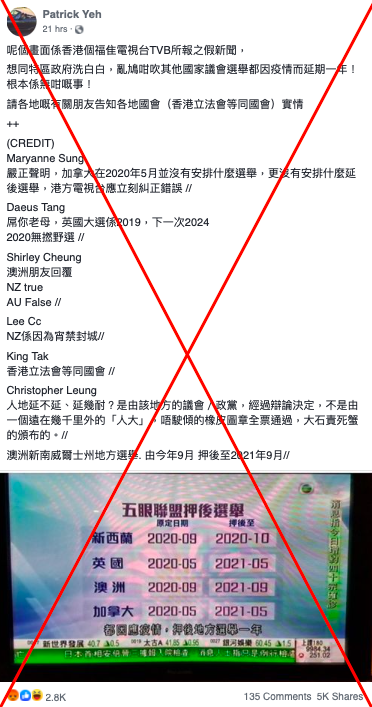 It is headlined: “The postponement of Five Eyes’ elections”.

Five Eyes is a reference to the intelligence sharing pact between the major English-speaking countries: Australia, Canada, New Zealand, the United Kingdom and the United States.

The post circulated two weeks after the Hong Kong government announced the election for the financial hub's partially-elected legislature would be delayed  for a year because of the pandemic, as AFP reported here on August 1.

Part of the Facebook post’s traditional Chinese caption translates to English as: “This photo shows fake news reported by TVB, Hong Kong government's favourite news organisation. They want to help build up Hong Kong Government’s reputation by saying crap like other countries have postponed their election for a year due to the pandemic! That's not true!”

The second part of the caption credits six people who have purportedly “fact-checked” whether the listed countries have postponed elections.

Other social media users shared the screenshot in posts claiming that the graphic shows the Hong Kong authorities' decision to postpone local elections was consistent with steps taken by other governments during the pandemic.

Ben Chan, a pro-Beijing lawmaker in Hong Kong, shared the photo alongside such a claim on Facebook here on August 17, 2020.

In response to the social media posts which expressed outrage about the graphic, a TVB spokesperson told AFP by email on August 21, 2020: “This is yet another disinformation spread online and a smear tactic to discredit TVB.”

The broadcaster corrected the graphic in a later newscast.

Of the four countries listed in the graphic, only New Zealand has postponed national elections.

Citing a second coronavirus wave, New Zealand Prime Minister Jacinda Ardern announced the September general election would be postponed by one month until October 17, as AFP reported here on August 17, 2020.

As of August 11, 2020, only local elections have been delayed -- from a few months to up to a year -- due to the pandemic in Australia, Canada and the United Kingdom, according to the International Foundation for Election System, a US-based non-profit that supports and tracks international elections.

A Google keyword search found the TVB graphic originally aired on August 17, 2020. The graphic can be seen at the one-minute and 52-second mark in the clip published on the TVB website here.

During the broadcast, however, the news anchor accurately reported that: “Due to the pandemic, other than New Zealand who has postponed their national election, many countries in the Five Eyes have also postponed their local elections for a year.”

TVB later amended the graphic for their evening news report, which was published here on the night of August 17. The updated graphic can be seen at the one-minute and 33-second mark and includes clarifying text that reads “national election” under New Zealand.

Below is a screenshot comparison of TVB’s original graphic, which was shared widely on social media, (L) and the amended TVB graphic that was later aired (R) with the update circled in red:

A screenshot comparison of TVB's original graphic and the amended graphic, the update is circled in red by AFP.

The misleading social media posts that shared the original graphic out of context were also debunked by Hong Kong fact checkers Fact Check Lab and Kau yim on August 18, 2020.