Multiple posts shared hundreds of times on Facebook and Twitter claim Germany’s Foreign Minister Heiko Maas said in a press conference on October 26, 2020 that Thailand’s King Maha Vajiralongkorn “didn’t do anything illegal” while at his German residence. The posts circulated online after Thai pro-democracy protesters marched to the German Embassy in central Bangkok, calling for reforms. However, the claim is misleading; in the October 26 press conference pictured in the posts, Maas said his office was still examining the Thai king’s movements in Germany and that the government would “act immediately” if the royal leader was found to have broken the law. 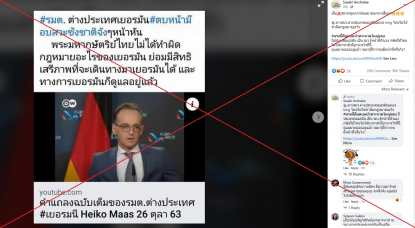 The post shows a screenshot of this YouTube video, titled “The Full Statement of Germany’s Foreign Minister Heiko Maas on October 26, 2020.”

Heiko Maas has served as Germany’s Foreign Minister since 2018.

The Thai-language text above the screenshot reads: “#Foreign Minister of Germany slapped the nation haters harshly.

“The Thai King didn’t do anything illegal in German law, he must have the rights and freedom to travel to Germany and German authorities take care of him nicely.”

The post’s Thai-language caption translates to English as: “When the embassy hit the mob in the middle of the intersection / The German Foreign Minister stated that the Thai king did not break any laws #Thisisabigslapintheface.

“The German minister knows his duties. The Thai King did not come here to act powerful in any way.

“He has always taken care of this [agenda] Who would know better than him?”

On October 26, 2020 Thai pro-democracy protesters gathered at the main intersection in Bangkok before marching to the German embassy, in defiance of their monarch who they claim spends long periods of time in Germany, AFP reported here.

On October 7, 2020, Maas said during the federal parliamentary session that the Thai king should not be conducting Thai politics from Germany, Reuters reported here.

During a press conference on October 26, Maas said German authorities were still investigating whether the Thai king had broken any laws during his time in Germany.

The press conference was live-streamed by Periscope and shared in this tweet by the German Foreign Office on October 26, 2020.

The press conference, given in German, was dubbed in English.

At the video’s 13-minute 10-second mark, a journalist is heard posing a question to Maas.

The journalist’s comments translate to English as: “In Thailand, there are protests today again against the government, and demonstrators are demanding that the federal government looks into whether the Thai king had acted against the law here in Germany, I think that this review has been ongoing for several weeks and is the situation exacerbating since the German government was asked to cooperate?”

Heiko Maas replied: “Yes, we follow the developments in Thailand closely, there are people taking to the streets for their rights and of course I have an eye on what the king of Thailand has been doing in Germany we are looking into that and if there are things that we feel have broken the law… this will have immediate consequences of course.”

Deutsche Welle, a German public international broadcaster also reported here on October 26, 2020 that Maas had said German authorities would be monitoring the Thai king during his stay in Germany. It did not state that German officials had exonerated him.

The article’s headline reads: “German Foreign Minister Heiko Maas: 'I am also watching what the Thai king gets up to in Germany.”

Since the misleading claim circulated, Germany has said it does not believe Thailand’s king has breached its ban on conducting politics while staying there, Reuters reported here on October 29, 2020.