Two photos of a police sniper and a protester armed with a bow and arrow have been shared thousands of times in multiple Chinese-language posts on Facebook and Twitter which question whether they show an "equal use of force" by both sides. The posts were shared as Hong Kong entered its sixth month of increasingly violent pro-democracy protests. The photos have been shared in a misleading context; one of the photos does show a Hong Kong protester carrying a bow and arrow, but the other image shows a police sniper in Cologne, Germany in September 2018.

The photos were published on Facebook here on November 17, 2019, just one day before a violent standoff between pro-democracy demonstrators and police at Hong Kong Polytechnic University. Here is an AFP report about the campus siege.

The misleading Facebook post has been shared more than 2,300 times. Its traditional Chinese-language caption translates to English as: “Equal use of force?” 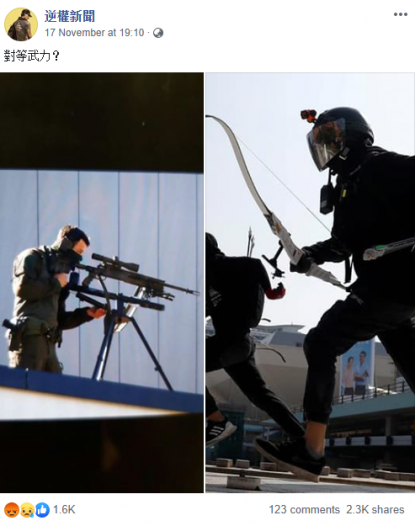 The photos have been shared in a misleading context; one of the photos does show a Hong Kong protester carrying a bow and arrow, but the other image shows a police sniper in Cologne, Germany.

A reverse image search found the photo of the police sniper was published here by Reuters in September 2018.

The photo’s caption reads: “A sniper is seen on the roof opposite the Cologne Central Mosque before it's official inauguration in Cologne, Germany, September 29, 2018. REUTERS/Wolfgang Rattay”.

The Reuters photo corresponds with the mosque's location on Google Street View here.

AFP's report on the mosque's opening was published here on September 30, 2018.

Another reverse image search on Google found the other photo was published here on Reuters’ website on November 15, 2019. The image was credited to Reuters photographer Thomas Peter.

Below is a screenshot of the photo on Reuters' website: 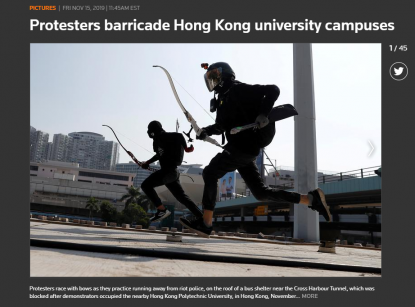 Screenshot of this photo

The photo caption states: "Protesters race with bows as they practice running away from riot police, on the roof of a bus shelter near the Cross Harbour Tunnel, which was blocked after demonstrators occupied the nearby Hong Kong Polytechnic University, in Hong Kong, November 15, 2019. Protesters have turned several universities into fortresses, stockpiled with petrol bombs and bows and arrows, amid some of the worst violence in the former British colony in decades. REUTERS/Thomas Peter."