This is firefighting foam deliberately sprayed to prevent combustion

Footage of a white substance covering a highway in Nigeria’s commercial hub Lagos has circulated in social media posts claiming it shows snow falling in the West African country. However, this is false; the substance is special foam sprayed by Lagos firefighters to prevent a fire following an oil spill.

“We have snow in Nigeria now God started with Maryland first. Before 2050, it will get to Ikorodu and Ikotun,” reads a tweet by popular Nigerian social media influencer Adegoke Emmanuel, also known as Pamilerin. It features a 26-second clip showing vehicles driving through a white substance. 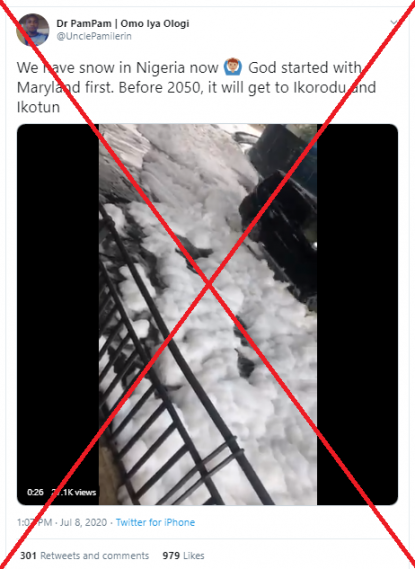 A screenshot taken on July 9, 2020, showing the misleading tweet

Maryland, Ikorodu and Ikotun are major districts in Lagos.

Pamilerin’s tweet has racked up nearly a thousand likes since its publication on July 8, 2020. The comments suggest many Twitter users believed the claim that it snowed in Lagos, despite its tropical climate. 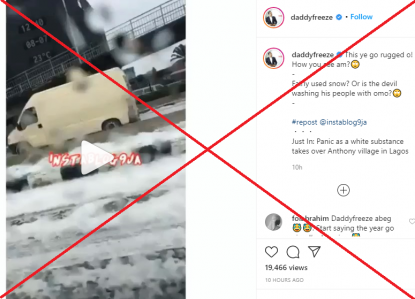 Footage of the substance also appears in several Facebook and Instagram posts that describe it as snow. A voice saying “Snow in Lagos” is heard in this video that has been viewed by more than 10,000 people. We’ve archived similar posts here, here and here. 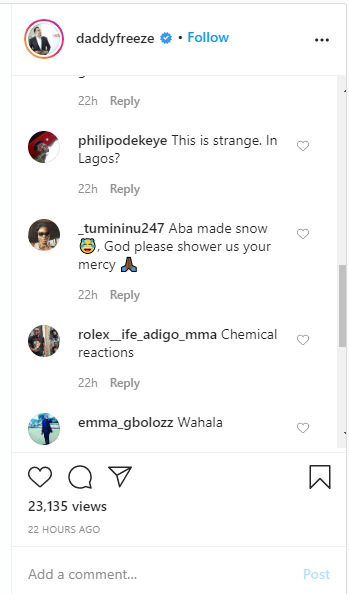 A screenshot taken on July 7, 2020, showing some of the comments on Instagram

However, the videos have been shared in a misleading context. They actually depict firefighting foam sprayed on the highway by the Lagos state fire service to avert a possible fire outbreak.

The effort followed an accident involving an articulated truck that was carrying oil and spilled its contents onto the road, according to a statement tweeted by the Lagos state information commissioner, Gboyega Akosile.

The attention of the agency has been drawn to videos circulating concerning some streets in Anthony Village. pic.twitter.com/zjVXsXV7lq

“Blanketing of the entire scene of incident was carried out by the Lagos State Fire service as a result of the content leakage from the container (Black oil) to prevent any secondary incident (sic),” reads the statement by the Director-General of Lagos State Emergency Management Agency, Olufemi Oke-Osanyintolu.

“The reaction from this blanketing is what has led to the appearance of 'snow/foam' in the aforementioned area.”

UPDATE: A Tanker fell overnight and our Emergency Agencies poured the foam material to prevent combustion.. Nothing to be scared of ..

A close look at the viral video shows that the white substance is foamy and does not behave like snow -- it is piled high on some parts of the ground, while nearby areas remain entirely dry. 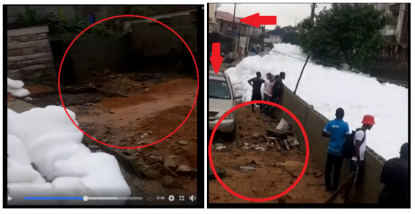 A screenshot taken on July 9, 2020, showing the dry portion