Skip to main content
Members of Antifa protest in downtown Charlottesville, Virginia, on August 11, 2018, one year after a violent white nationalist rally that left one person dead and dozens injured (AFP / Logan Cyrus)

FBI did not say most Antifa members work as teachers

Facebook and Instagram posts claim the FBI said people associated with the Antifa movement are most commonly employed as teachers. This is false; the FBI said it has not made any such statements about the occupations of those attracted to political ideologies like anti-fascism.

“Wow! Teachers are the number one occupation of the Antifa terrorist organization according to the FBI,” claims a July 11, 2020 Facebook post shared more than 9,100 times from an account in Winnipeg, Canada. The claim was also circulated by political pages on Facebook in Manitoba and Saskatchewan. 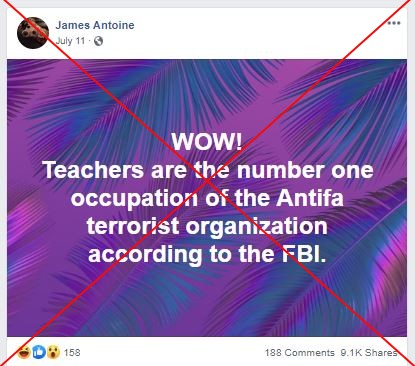 According to a search using social media monitor CrowdTangle, the claim was originally made in a much longer Facebook post on June 24, 2020. It became a standalone claim in public Facebook posts in the United States on July 6 while also circulating on Instagram.

When contacted by AFP about the claim that the Antifa movement attracts teachers, the US’s top law enforcement agency said: “The FBI has not made any such statements about the occupations of people who are attracted to particular ideologies."

Antifa, short for anti-fascist, is a structureless movement which says it is dedicated to fighting fascism online and in public.

The movement has come under scrutiny -- particularly from President Donald Trump -- during recent protests against police violence and racism across the US after the death in police custody of George Floyd, an unarmed black man from Minneapolis.

On May 31, Trump tweeted that he intended to designate Antifa as a terrorist organization. However, the US has no statute that permits such a designation for a domestic group on the grounds of violent conduct or intent, unlike foreign terrorist organizations, such as Al Qaeda or Islamic State, which have been listed under section 219 of the Immigration and Nationality Act.

A statement from the FBI further explained that domestic terrorism investigations focus on criminal activity by individuals, regardless of their affiliation.  “The FBI does not and will not police ideology,” it said.

A search for Antifa on the Federal Bureau of Investigation website finds only one result, a press conference by FBI director Christopher Wray on June 4, 2020 in which he referred to the movement as “anarchists” during a discussion of unrest following Floyd’s death.

Screenshot of the FBI website search results taken on July 20, 2020

Richard Smith, a spokesman for the National Education Association, the largest membership organization in the US dedicated to public education, told AFP by email that his group does not have any “information that would support the allegation and are deeply skeptical of it.”

AFP Fact Check has examined other false claims about Antifa, including unproven plots to attack Gettysburg National Cemetery or suburban neighborhoods, and false ties between the Minnesota attorney general and the movement.