The false tale of the bullfighter’s epiphany

A photo of a matador facing a bull has recently resurfaced and is presented as the exact moment that led Alvaro Munera to end his bullfighting career, upon realizing the cruelty of his sport. However, the real Munera ended his career after a severe injury, and the matador in the photo is intentionally striking a dangerous pose to challenge the bull.

“This incredible photo marks the end of Matador Torero Alvaro Munera’s career,” reads the caption of a photo shared tens of thousands of times in several languages. 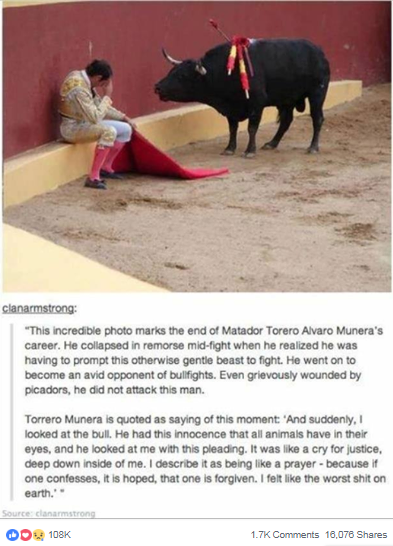 The image depicts a man sitting down, head lowered, one hand on his temple, as though he were realizing something. Facing him a couple feet away is a bull looking at the torero, a few banderillas, or bullfighting spikes, sticking out of its back.

The caption also attributes a quote to Munera, in reference to scene captured in the photo. “And suddenly I looked at the bull. He had this innocence that all animals have in their eyes, and he looked at me with this pleading.”

The post was shared tens of thousands of times in English, French, Spanish, Italian, and more over the past decade.

What happened to Munera?

Munera, also known as El Pilarico, was a famous Colombian matador who was injured by a bull in the arena in 1984, after which he began to promote anti-bullfighting campaigns.

“It’s not me and that’s not what happened to me,” Munera told AFP in Spanish.

“I left the world of bullfighting due to an accident that left me in a wheelchair.”

Part of the quotation presented in the posts also exists, but it is out of context. The part of it that describes the bull’s eyes was published in Spanish newspaper El Pais, on July 30, 1995, well after Munera retired.

It appeared in an excerpt named “The inhuman race,” from the book La Casa Sosegada by Spanish writer Antonio Gala, available on page 23 of this document. This translation reads “All of a sudden, the bull, his eyes innocent and imploring, stared at me.”

What is happening in the photo?

The photo is real, but the reality is far from what the caption suggests. The bullfighter in the photo is performing a desplante, a common move in bullfighting in which the matador asserts his dominance over the bull by deliberately placing himself in a dangerous position. The emotion of the scene is defiance, not contrition. Three sources told AFP that the man in the photo is Francisco Javier Sanchez Vara, a famous Spanish bullfighter.

Veronica Dominguez, a Spanish photographer specialized in corrida (herself the daughter of famous matador Paco Dominguez), also confirmed to AFP that it was “Sanchez Vara, without a doubt.” She based her assessment on experience she said allows photographers in the taurine arts recognize the silhouettes, hair, and gestures of matadors without having to see faces.

Munera told AFP, “I understand the person in the photo is a bullfighter whose last name is Sanchez Vara.”

Several media who debunked the photo in the past have also suggested this. 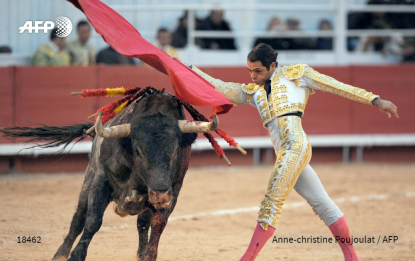 The presentation of this photo is deceitful. As Munera confirmed, he is not the man in the image. He now sits on Medellin’s municipal council, while Sanchez Vara, presumably the man in the photo, continues his career as a matador.