As Earth Day was celebrated on April 22, hundreds of Facebook accounts shared a meme claiming wind turbines require more hydrocarbon-emitting resources to produce than the energy they will generate. This is false; the statement appearing in the meme is a selectively edited quote and multiple studies have found that, unless poorly placed, wind turbines quickly pay back their net energy costs.

The false Facebook posts vary slightly, but they all claim that a windmill could spin "until it falls apart and never generate as much energy as was invested in building it." One current iteration of the meme is pegged to Earth Day. Another calls wind "idiot power." Similar posts have circulated since at least 2015. 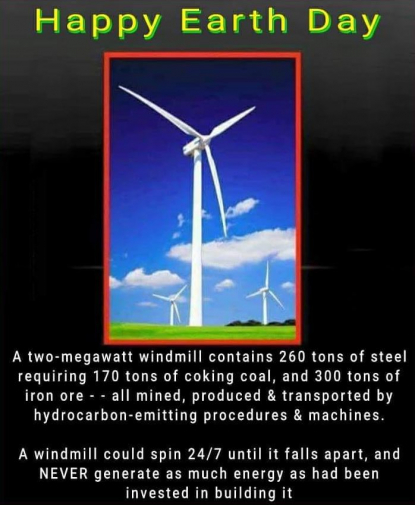 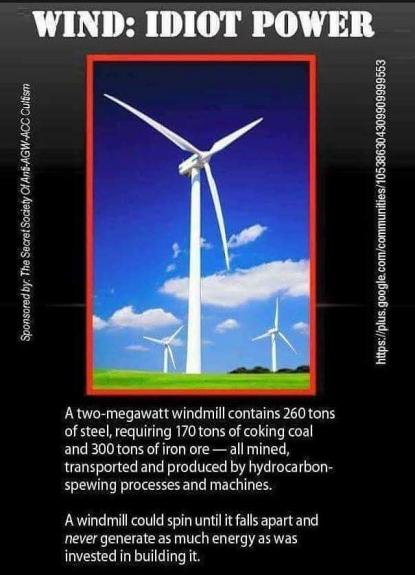 Another version of the meme currently being shared attributes the quote about windmills to Thomas Homer-Dixon, a Canadian professor who holds a University Research Chair in the Faculty of Environment at the University of Waterloo. 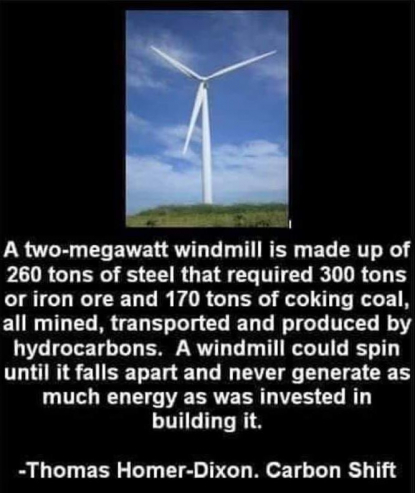 Homer-Dixon specifically addressed the meme on his website in May 2018, calling it false. He explained that the text was selectively excerpted from a chapter of the book Carbon Shift which he edited. The chapter was written by Canadian scientist David Hughes.

"The concept of net energy must also be applied to renewable sources of energy, such as windmills and photovoltaics. A two-megawatt windmill contains 260 tonnes of steel requiring 170 tonnes of coking coal and 300 tonnes of iron ore, all mined, transported and produced by hydrocarbons. The question is: how long must a windmill generate energy before it creates more energy than it took to build it? At a good wind site, the energy payback day could be in three years or less; in a poor location, energy payback may be never. That is, a windmill could spin until it falls apart and never generate as much energy as was invested in building it."

Natural Resources Canada states on its website that wind power accounts for five percent of electricity generated in the country, placing Canada ninth worldwide in terms of wind power capacity.

According to the Canadian Wind Energy Association (CanWEA), an industry group, a typical turbine will produce enough clean energy to offset the emissions used in its production in 6-18 months and then produce electricity for a further 20-25 years.

CanWEA Communications Advisor Anastasia Smolentseva told AFP in an email: "A number of studies have looked at wind power's 'energy balance', i.e. the time needed to generate the equivalent amount of energy that was required for manufacture and construction, and they have concluded that wind energy has one of the shortest energy payback times of any energy technology."

This conclusion was shared by a 2010 meta-analysis of 50 studies on net energy return for wind power. It found that wind power was in a "favorable position relative to fossil fuels, nuclear, and solar power generation technologies in terms of energy return on investment."

A 2014 study by US researchers focusing on 2-megawatt wind turbines in the Pacific Northwest also found "a wind turbine with a working life of 20 years will offer a net benefit within five to eight months of being brought online."

Tom Levy, the Senior Wind Engineer for CanmetENERGY-Ottawa, Canada's leading research and technology organization in the field of clean energy, told AFP by email: "Our team is not aware of any specific wind turbines or wind farms in Canada that have failed to produce more power than was used to create it, or any cases where a wind farm in Canada has failed to generate as much clean energy as it took to build it."

While the production of a wind turbine will require fossil fuels and produce greenhouse gas emissions, the National Renewable Energy Laboratory found wind energy's total emissions are similar to other renewables and much lower than fossil fuels.

Cutting Canadian foreign aid would not offset costs of taxes

Does this photo really show Belgians hanging a child in the Congo?