Skip to main content
Former Pakistani prime minister Nawaz Sharif addresses a press conference in Islamabad on January 3, 2018. - Pakistan angrily dismissed threats by US President Donald Trump to cut off aid as completely incomprehensible on January 2, in the latest diplomatic row to rock the shaky alliance between Washington and Islamabad over militancy. (Photo by FAROOQ NAEEM / AFP)

Multiple posts on Facebook and Twitter claim that former US President Donald Trump wrote a book titled “The Original Face of Pakistan'' that includes damaging revelations about former Pakistani Prime Minister Nawaz Sharif. The claim is false; Trump has written no such book.

The claim was made in a text graphic that was published on Facebook here on March 11, 2021. The post has since been shared over 300 times.

The Urdu graphic, which features a photo of Sharif, translates as: “US President Donald Trump, in his book “The Original Face of Pakistan”, writes that if Nawaz Sharif had stayed three years more in power, he would have bought Pakistan. Donald Trump writes that Nawaz Sharif was going to sign a 50 billion dollars agreement with the United States for spying on his nuclear weapons. Spread this post everywhere so that the ugly face of Nawaz Sharif can be exposed before everyone.” 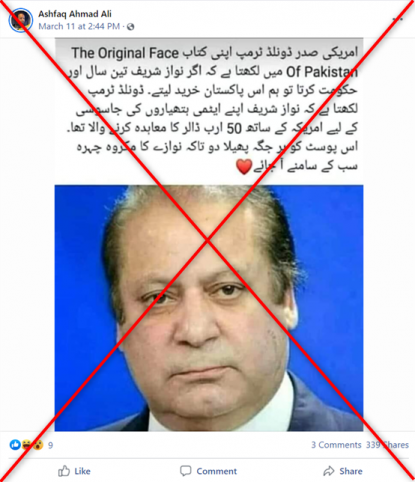 Sharif, who served as prime minister in the 1990s and again from 2013 to 2017, was ousted over corruption allegations and is currently residing in Britain after being released from prison in Pakistan for medical treatment, as AFP reported here.

A keyword search found that there are no credible media reports or official statements to suggest that Trump ever wrote a book titled “The Original Face of Pakistan”.

Amazon, the leading US online book seller which carries many titles authored by Trump, shows no results for such a book. Books written by Trump can be seen on Amazon here.

Goodreads, a major US book review and recommendations platform, also does not list any such book on Pakistan on its author page for Trump.

Trump has published several books in the past with top publishers such as Simon & Schuster, Penguin Random and HarperCollins. None of the publishers’ author pages for Trump — seen here, here and here, respectively — show any book titled “The Original Face of Pakistan”.