Skip to main content
A shopper walks past an advertisment for the UK government's NHS Test and Trace system in Regent Street in London on June 15, 2020 as some non-essential retailers reopen from their coronavirus shutdown. (AFP / Glyn Kirk)

Multiple Facebook and Twitter posts shared hundreds of times claim that Ipsos MORI, a British market research company investigating novel coronavirus testing in the UK, derives its name from a Latin phrase that translates as "they die". The posts suggest the translation reveals the company’s “motives” during the pandemic. The claim is false: the company’s name derives from two other companies which merged in 2005, 15 years before the pandemic was declared.

The post was shared alongside a photo which shows an invitation to participate in a coronavirus testing research study. The letter includes logos for Ipsos MORI; UK university Imperial College London; and the UK’s Department of Health and Social Care.

The post states: “The Name of a Covid-19 testing research company 'Ipsos MORI' Translates to 'They DIE' in Latin. Never once have they hidden their motives in History for those with Eyes to See.” 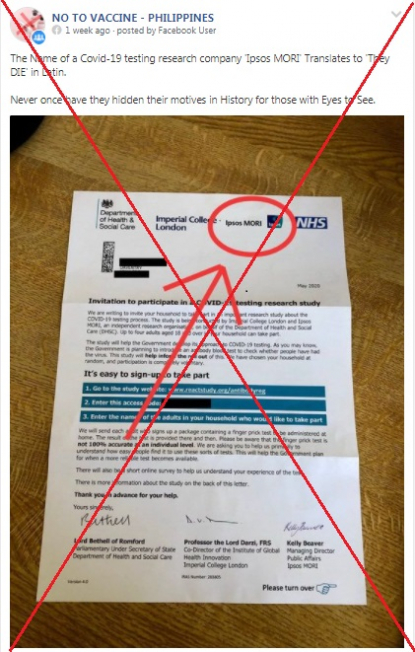 A screenshot of the misleading post, taken on October 21, 2020

The claim is false; the company’s name was established in 2005 after a merger between two other companies that existed decades before the Covid-19 pandemic.

On July 20, 2020, the company said in this post on its website that the name Ipsos MORI “doesn’t mean anything.”

“Our name - Ipsos MORI - was formed in 2005 by the merger of Ipsos, founded in France in 1975 with its named (sic) derived from the Latin phrase ‘ipso facto’ and Market and Opinion Research International (MORI), founded in the UK in 1969. This merger created our name: Ipsos MORI.”

UK newspaper The Guardian reported on the merger between the two companies in October 2005.

Michael Matza, who teaches Latin at the University of the Philippines, told AFP in an email on October 19, 2020 that while “Ipsos” means “themselves or they” and “Mori” means “to die”, a correct way to say “they die” in Latin is: “Moriuntur”.

A similar misleading claim was earlier debunked by AFP here in Polish.