Skip to main content
A Sri Lankan Roman Catholic sports a tatoo of Jesus Christ in the north-western village of Madhu on August 15, 2009. (AFP / Ishara S.kodikara)

Multiple posts shared hundreds of times on Facebook in February 2021 claim that Sri Lanka prohibits people with tattoos from donating blood. The claim is misleading: as of March 3, 2021, Sri Lanka’s National Blood Transfusion Service (NBTS) says people with tattoos can donate blood. They may, however, be temporarily discouraged from blood donation for one year after getting a tattoo as a precautionary measure against blood borne infections, the NBTS says.

The Sinhala-language text superimposed on the image translates to English as: “This will be very important to those expecting to get a tattoo.

"Not sure if you guys are aware of this, but did you know you can’t donate blood if you are tattooed? Also, even if you manage to donate blood, your blood will be discarded at the point where it is being screened.

"A lot of young boys and girls are into tattooing these days, that is why this was mentioned. If you are planning to get a tattoo, don't donate blood.” 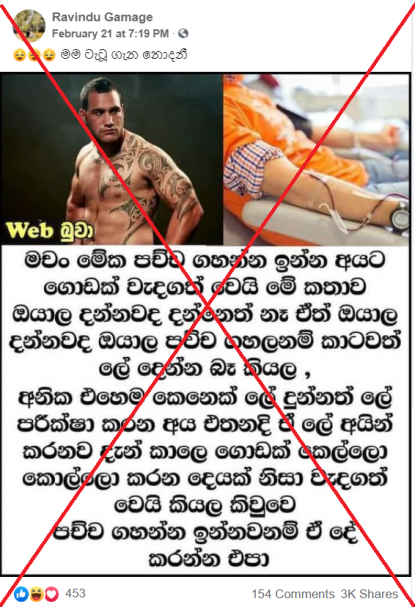 The same graphic has been shared in Facebook posts here, here and here alongside an identical claim.

The claim, however, is misleading. Sri Lanka’s National Blood Transfusion Service says people with tattoos are only temporarily discouraged from blood donation for one year as a precautionary measure against blood borne infections.

“We do advise persons who have been tattooed to wait a minimum of one year before donating blood, as a precautionary measure against blood borne infections such as Hepatitis B or C, Malaria, Syphilis and HIV. But that is not a blanket ban against persons with tattoos against donating blood,” he said.

Dr. Edirisinghe went on to say that all blood samples donated are placed through a screening process, during which any samples with contaminants such as blood borne infections would be detected.

“There is a lengthy counselling process before an individual is permitted to donate blood. At that point, if a donor is inked we enquire into the history of tattoos prior to permitting them to donate blood. The one year wait time is strictly a precautionary measure and should not be regarded as a move to discourage them from donating blood,” he said.

As of March 2, 2021, the NBTS’ website has not excluded people with tattoos in its Donor Selection Criteria.