Skip to main content
A father with his children aboard their bicycle crosses an almost empty road in Manila on March 20, 2020, after the government imposed an enhanced community quarantine against the rising numbers of COVID-19 coronavirus infections. (AFP / Ted Aljibe)

Multiple Facebook posts shared in February 2021 claim that cyclists in the Philippines must register their bicycles as part of a new nationwide scheme. The claim is false: the posts shared a screenshot from an article published in June 2020 about a local government order to register bicycles in Cebu City. The order, however, was scrapped hours after it was announced. The Philippine government has not implemented a bicycle registration programme as of February 22, 2021.

It shows a Tagalog-language news graphic by Philippine tabloid Abante Tonite. It states: "Bicycles need to be registered."

The Facebook post's Tagalog-language caption and text overlay on the screenshot reads in English: "Good flow of money for LTO in 2021.”

“LTO” is the acronym for Land Transportation Office, the government agency under the Philippine transport department that is tasked with registering motor vehicles nationwide. 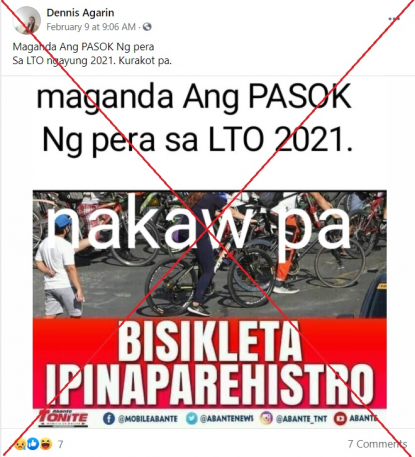 A screenshot of the misleading post, taken on February 19, 2021

"Bicycles are not motor vehicles. This is outright corruption," one comment reads. "In the future pots and pans need to be registered too," said another.

An identical photo alongside a similar claim was also shared here, here and here in posts from Facebook users in the Philippines.

A search on the Facebook account of Abante Tonite found the news graphic published on June 7, 2020 in a report about a local ordinance in Cebu City in the central Philippines. It is not a recent LTO order covering the entire country, as suggested in the misleading posts.

"The Cebu City Transportation Office urged the public to have their bicycles registered especially if they use these frequently," the Abante Tonite report reads.

The registration order was halted hours after it was announced, local media reported here and here.

Danilo Encela, assistant chief at LTO’s operations division, told AFP that it had not implemented a nationwide bicycle registration scheme.

“Ordinary bikes are not motor vehicles," he said in a phone interview on February 19, 2021. "Those are not under the jurisdiction of the LTO.”

As of February 22, 2021, keyword searches on Google did not yield any reliable report indicating the Philippine government has required nationwide bicycle registration.