Does this photo really show Belgians hanging a child in the Congo?

A photograph shared thousands of times in multiple posts shows a black child standing on a platform, surrounded by white men holding a rope. Captions claim the picture shows Belgians preparing to hang a child in the Congo in 1908. However, US military historians told us the men’s clothing suggests they are American soldiers. We’re still trying to track down the source of this image. Can you help?

The photo has been shared on Facebook, for example in this post, which we’ve archived, shared more than 69,000 times. The caption reads: “This is in 1908. Belgians reading the Bible before hanging a 7 year old black child in the Congo under King Leopold. The boy was hanged because his father did not produce enough wheat for the colonialists.” The photo has also been shared on Twitter here, here and here, where captions also claim it shows Belgians preparing to hang a child in the Congo.

AFP contacted several specialist historians in Belgium who said they had never seen the photo before, although it was “very probably” not taken in the Congo.

“Atrocities were mostly committed against adults -- women were kidnapped and men were killed. Children, on the other hand, were often indirect victims of the system of terror, not of hanging,” Pierre-Luc Plasman, author of Leopold II, Potentat congolais (Leopold II, Tyrant of the Congo) said in an email.

“Violence during village attacks was brutal and immediate, not staged (like in the photograph).”

From 1885 to 1908, the country now known as the Democratic Republic of the Congo was known as the Congo Free State. Under the rule of King Leopold II of Belgium, private companies were given free rein to extract the country’s rich natural resources. Colonialists committed well-documented atrocities against the Congolese people during this period, including the murder of labourers who failed to meet their production quotas for goods such as rubber and ivory.

After an international outcry, the Belgian parliament voted to annex the territory as a colony, ending Leopold’s personal rule over it. The Belgian Congo remained a Belgian colony until independence in 1960.

Despite the atrocities committed by Belgian colonists at the turn of the century, “we don’t have any knowledge or proof of children hanged in the Congo,” Guido Gryseels, director of the Royal Museum for Central Africa in Belgium, told AFP.

Historians also pointed out that while men in the photograph appear to be wearing military uniform, it is not the uniform that would have been worn by Belgian troops in 1906.

“The uniform of Force Publique soldiers, the only military presence in the Congo Free State, was reglemented and did not look like the uniforms in the photograph,” said Pierre Lierneux, historian at the Royal Museum of the Armed Forces and Military History in Brussels.

“European officers wore white canvas uniforms or blue tunics; khaki was not worn, except in a personal capacity, and was slowly introduced from the Great War.”

Below is a screenshot showing a uniform worn in the Congo Free State, as seen on Military Sun Helmets, a website about historical military helmets. 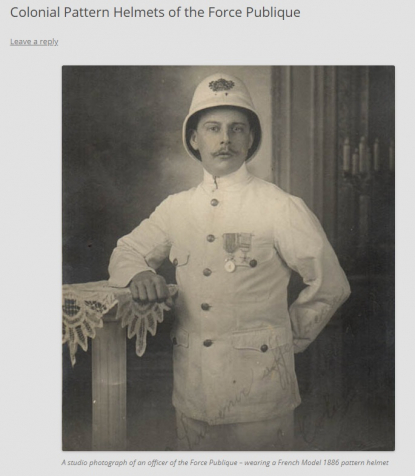 A screenshot, taken on April 26, 2019, shows a uniform worn in the Congo Free State as seen on militarysunhelmets.com

We used a reverse image search to try to find more clues about where the photo came from.

A search on the Russian search engine Yandex revealed similar versions posted online -- but without the sides of the photo cropped, showing more of the background. Jean-Philippe Belleau, an anthropology professor at the University of Massachusetts in Boston, said the cylindrical pump on the left suggests the photo was taken later than 1908, as the Facebook post suggests.

He added that he was “so intrigued by this picture that I had to stop writing my current book!”

A reverse image search on Google suggested the picture was published as early as July 30, 2004 on a web page under the username @the__hayaa.

That publication is no longer available, but the text under the link translates from Arabic as: “In 1730, the American parliament passed a law for Protestants, which legalised the extermination of American Indians, but what’s more, it also issued a decision to provide a reward of 100 pounds for each scalp”. 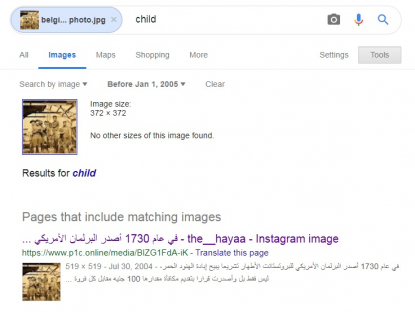 Other earlier posts include a blog on December 17, 2015, which includes the photo in an article about violence towards black people in the United States.

AFP contacted US military historians, who said the men’s uniforms suggested they were American.

“The men are wearing Army-type field shirts (square pocket flaps) and their trousers are breeches,” Owen Linlithgow Conner, Uniforms and Heraldry Curator at the National Museum of the Marine Corps in Virginia, said in an email.

“The field hats are 'montana peaked' which is US military style. If we see cords on the hats, this is definite clue that it is an Army image.”

Matthew Seelinger, chief historian at the National Museum of the United States Army in Virginia, said the men could be marines during America’s intervention in Haiti from 1915 to 1934, as “they were the only U.S. forces in Haiti at the time those type of uniforms were worn”.

Can you help us find where the photo was taken?

The experts we spoke to agreed that this photo does not show Belgian soldiers hanging a child in the Congo. But where was it taken? If you know, you can get in touch here.