A video has been viewed thousands of times in multiple YouTube, Facebook, Twitter and blog posts alongside a claim it shows a Filipino official beating a man after he violated coronavirus restrictions. The claim is false: the clip has been doctored to include a Tagalog-language audio track. The original video has circulated in unrelated reports about police violence in Colombia. 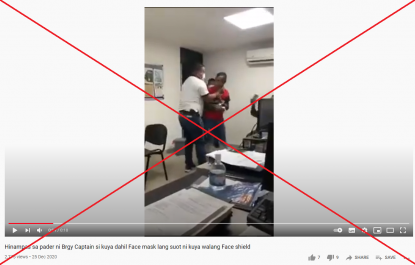 A screenshot of the misleading post, taken on January 4, 2021

The video shows a man being violently assaulted. Tagalog-language profanities can be heard in the background.

The post's Tagalog-language caption translates to English as: "Village chief slams man against the wall for wearing a face mask without a face shield".

Wearing plastic shields on top of face masks was made mandatory in public places in the Philippines on December 15, 2020 as part of government regulations to curb coronavirus infections.

Reverse image searches of the video’s keyframes through InVID-WeVerify, a digital verification tool, followed by keyword searches on Google, found the video corresponds to this news report posted on December 3, 2020 by Semana, a news organisation in Colombia.

The Spanish-language report states: “An officer at SIJIN (Judicial Investigation Section) police department in Atlantico slammed a detainee violently against the wall. Authorities said the uniformed man will be investigated."

Below is a screenshot comparison of the video in the misleading posts and the Semana news report: 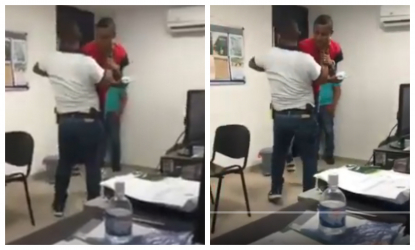 The police beating was reported by multiple news organisations in Colombia, for example by El Espectador here and La FM here.

The video in the misleading posts was digitally altered to include the Tagalog-language audio track.

The audio does not match the intensity of the slamming seen in the video. In contrast, the corresponding sound in the original video is loud and violent when the man actually hits the wall.

The misleading claim has also been debunked by Filipino news organisation Rappler here.