A video has been viewed tens of thousands of times in multiple posts on Facebook and Twitter which claim it shows a Pakistani opposition leader incorrectly giving the price of certain groceries in Pakistan. The posts claim the video is evidence that the politician is unfit to become the leader of Pakistan. The claim is false; the video has been doctored and there is no record of the politician making such a statement. 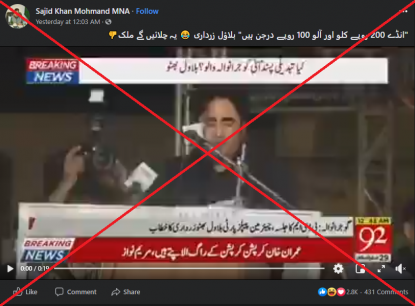 Part of the post’s Urdu caption translates to English as: “Eggs are 200 rupees per kilo, potatoes 100 rupees per dozen: Bilawal Zardari…how will they run the country”.

The claim is false; the video has been doctored.

Videos of Zardari’s October 16, 2020 speech at a rally of opposition party members was broadcasted by several local media outlets, including Naya Daur TV here and Capital TV here. Both videos show Zardari accurately describing which food items are sold in numbers and by weights.

Zadari is heard saying the same sentence in the Capital TV video at its seven-minute 57-second mark.

Below is a screenshot comparison of the video in the misleading Facebook post (L) and Naya Daur TV’s video: