Images purporting to show a television broadcast by an Indian news channel have been shared hundreds of times in multiple posts on Twitter and Facebook which claim animal sacrifices were banned in Jammu and Kashmir ahead of the Muslim Eid al-Adha festival. The claim is false; the Indian news channel said the images were doctored and that it has not broadcast the story; an AFP photographer captured photos of livestock on sale in Jammu and Kashmir one day prior to Eid.

The images were published on Twitter here on August 11, 2019, one day before Eid al-Adha, a major religious holiday for Muslims.

The tweet’s caption states: “This is Indian occupied Kashmir #WakeUpUN_KashmirBleeding”. 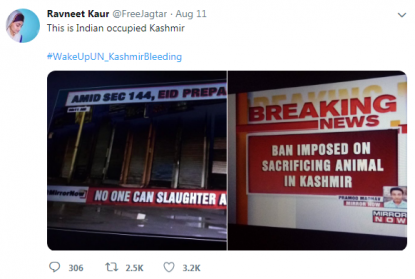 The tweet contains two images purporting to show part of a television broadcast. In the image on the left, the top banner states: “AMID SEC 144, EID PREPARATIONS”. The bottom banner states: “NO ONE CAN SLAUGHTER ANIMAL NOW”.

In the image on the right, the text states: “BREAKING NEWS: BAN IMPOSED ON SACRIFICING ANIMAL IN KASHMIR”.

The watermark for Indian news channel Mirror Now can be seen at the bottom right hand corner of both images.

The misleading post was published shortly after the Indian government revoked Jammu and Kashmir’s special autonomy on August 5, 2019, as described in this AFP article.

During Eid al-Adha, families are permitted to sacrifice a “ritually acceptable animal (sheep, goat, camel, or cow)”, according to this Encyclopedia Britannica definition.

The claim is false; the television channel report in the misleading post has been doctored.

Mirror Now Editor Faye D’ Souza said the images showed a “fake screen”, according to this tweet posted on August 11.

Her post states: “This is a fake screen. FALSE . Photoshopped

“1. The bottom ticker is missing;
2. The font is not the one used by the channel;
3. This is not a story carried by @MirrorNow”.

This is a fake screen. FALSE . Photoshopped
1. The bottom ticker is missing
2. The font is not the one used by the channel
3. This is not a story carried by @MirrorNow pic.twitter.com/Ugoz7lAQHo

An AFP photographer captured photos of livestock on sale in Jammu and Kashmir one day prior to Eid.

This AFP photo taken on August 11, 2019, one day before Eid, shows several men near their livestock.

The photo caption states: “Vendors wait for customers with their livestock ahead of the Muslim's Eid al-Adha festival during a security lockdown in Srinagar on August 11, 2019, after the Indian government stripped Jammu and Kashmir of its autonomy.” A screenshot of the AFP photo

Vikar Syed, an AFP stringer in Srinagar, the largest city of Kashmir, told AFP by phone on August 15: "There was no ban on animal sacrifice, vendors were selling sheep. I also got a sheep from the market and performed the Islamic ritual sacrifice on Monday (Eid day) at home."

This video shows Koran recitals at an Iranian university, not soldiers reciting the Koran in Russia